Buy either of these two thrilling hot hatches at 18 months old and you'll save a pretty penny, but which one will put the bigger grin on your face?...

A big straight-six engine and rear-wheel drive marked out this previous-gen M140i as unique in the class.

The great thing about buying a car that’s just been replaced by a newer model is that you can get a top-drawer performance package for the price of something altogether more ordinary.

Take a look at what we’ve got here. The BMW M140i may have been superseded recently by an all-new model, but this previous-generation version has long been one of our favourite used buys, and last year it was named as the What Car? Used Hot Hatch of the Year for under £20,000.

The M140i’s 335bhp turbocharged 3.0-litre six-cylinder engine may seem more fitting to a thoroughbred sports car than a hot hatchback, but with its rear-wheel drive layout, the M140i is something of an enthusiast’s dream. Its replacement, the all-new BMW M135i, comes with a more ‘ordinary’ 2.0-litre four-cylinder engine and more subdued four-wheel drive.

Bought a little newer and with fewer miles on the clock, as we’re testing it here, this M140i still represents excellent value for money and, because of that new version, there’s a healthy saving to be made. 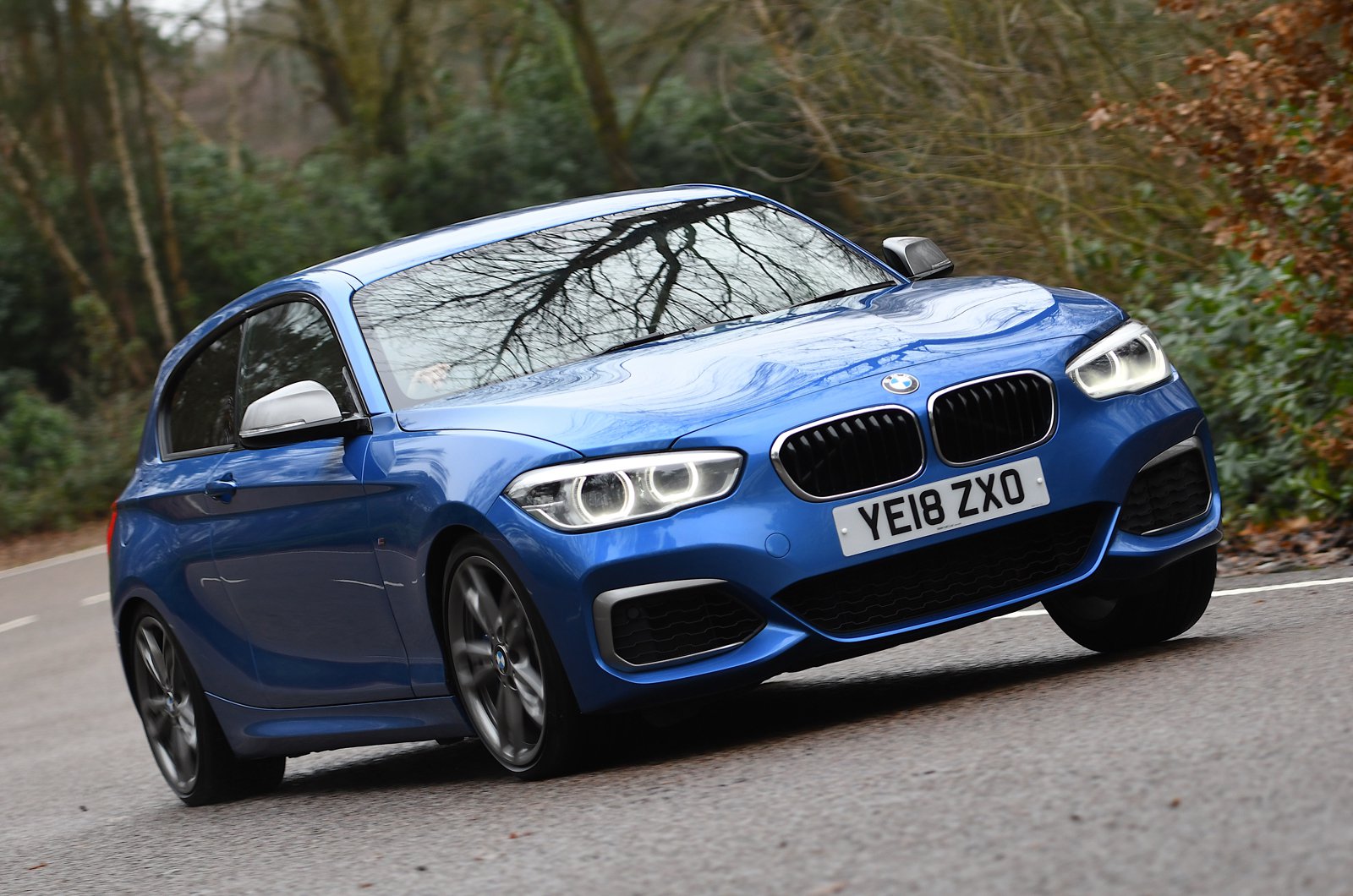 But it faces stiff competition in the shape of the equally wild Mercedes-AMG A35, a performance model essentially designed to give buyers a cheaper route into the super-sporting AMG world. With 302bhp under its bonnet, it’s not as hardcore as its circa-400bhp AMG A45 sibling, but it follows the same formula in most other ways, with its standard four-wheel drive and seven-speed dual-clutch automatic gearbox.

These are two very different interpretations on the hot hatch theme then, but is the older one better? Read on to find out.

Crikey, these are quick cars. Granted, the wet, wintry day of our test didn’t aid their getaways, but in the 0-60mph dash – that time-honoured ‘starter for 10’ asked of every hot hatchback – both produced blistering times. Still, only the A35 dipped under five seconds, helped by the fact that all four of its wheels are on call to put its power down. Nor do you need much skill to make that time happen; simply activate launch control, mash the accelerator and release its brakes. Job done.

In the wet, the M140i needs a more sympathetic approach. You can’t rely on its launch control because (a), the initiation procedure isn’t as easy, and (b), it isn’t all that effective when the road is slippery; when you pull the pin, instead of extreme forward motion, you get mostly wheelspin. We managed to set our best time without it, teasing the M140i away gently, feeding in its power smoothly and only giving it full beans once it was rolling above 30mph or so. 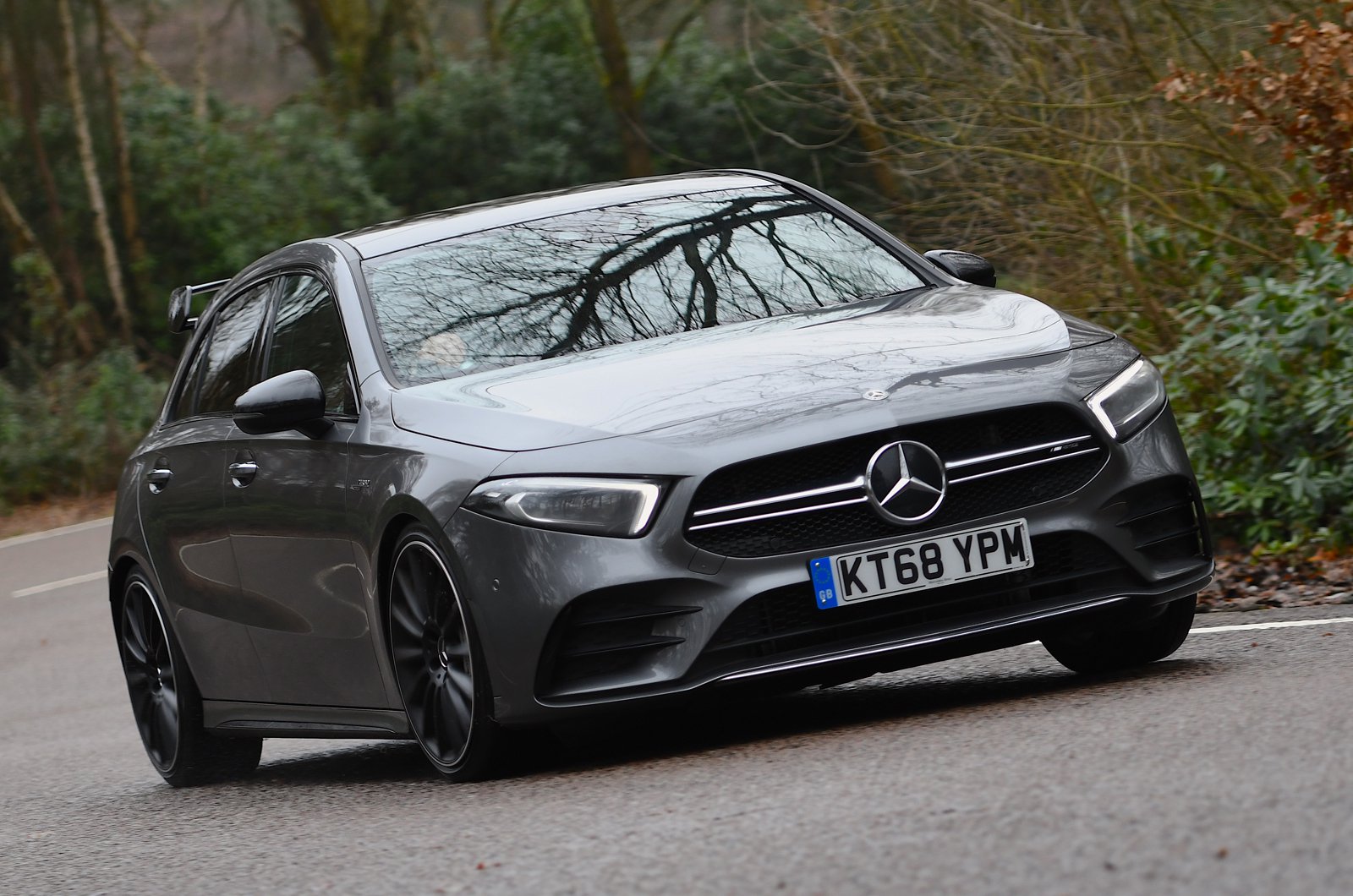 That said, we’ve previously timed an M140i at 4.5sec from 0-60mph, so we suspect it would have beaten the A35 in the dry. The fact is that, while the A35 is quick by most standards, the M140i feels even more ferocious. Its powerful engine pulls harder from low revs and spins more keenly to its limiter; that’s why its 30-70mph time, which reflects overtaking ability, is substantially quicker.

The M140i’s engine is a more joyous thing to work hard, too. Those six cylinders play a silken, sonorous tune, and despite the A35’s purposeful parp – infused with detonations from the exhaust pipes as you lift off – it’s just not as invigorating.

Then there’s the curious purgatory the A35 places you in if you accidentally hit the engine’s rev limiter. It simply leaves you hanging, refusing to let you change up for a frustrating second or two. It’s easy to do if you’re using the gearbox in manual mode, too, because the redline is at just 6500rpm – 500rpm lower than in the screaming M140i. The M140i’s conventional eight-speed automatic gearbox also responds more snappily to downshift requests, although those changes are somewhat slurred; when they happen in the A35, they’re altogether more aggressive. 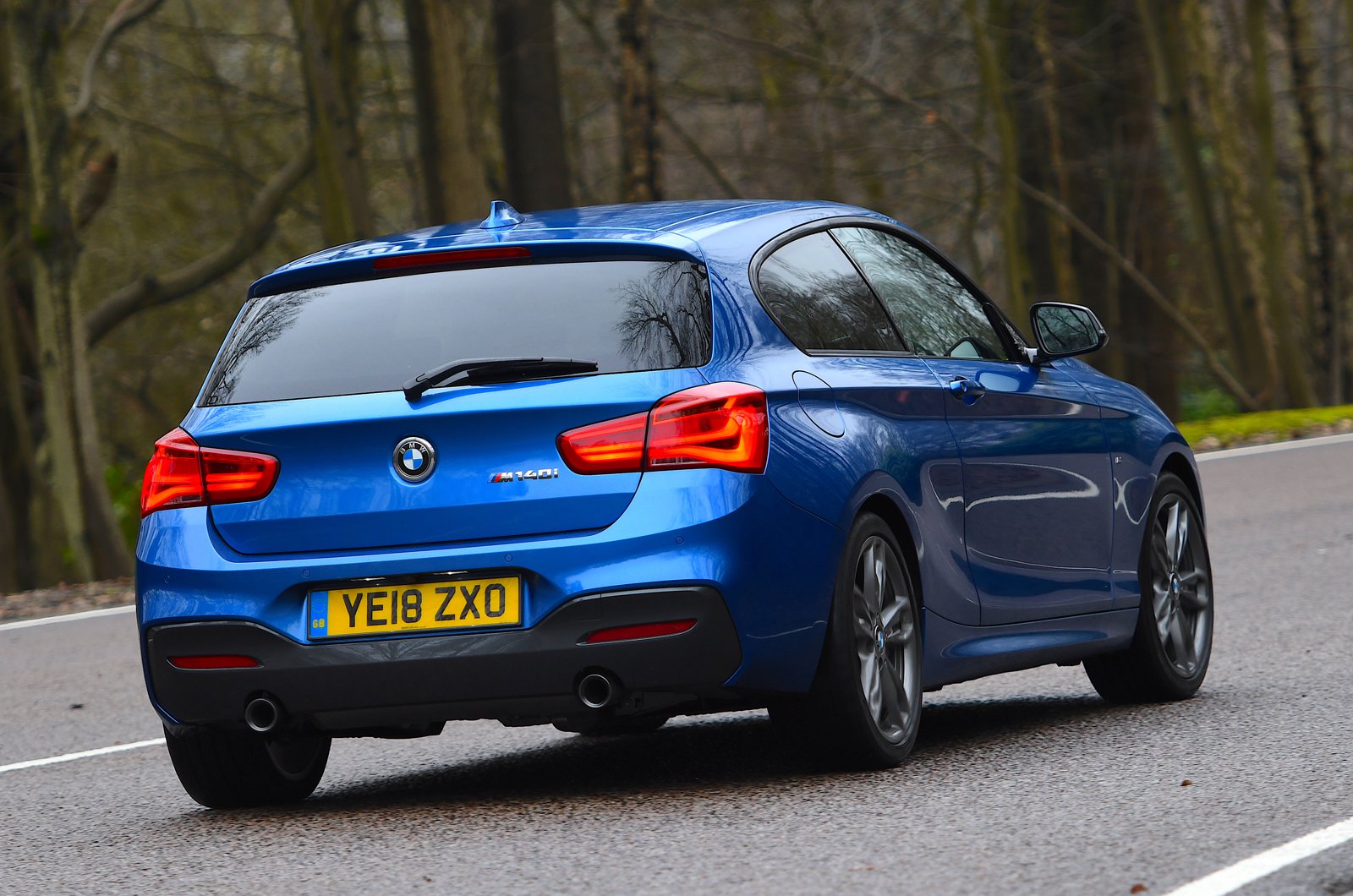 Neither car can quite emulate the handling prowess of the hot hatch glitterati (the Honda Civic Type R being the best of all), but the A35 is a fine thing to drive, with more grip than its rival, better traction out of corners and, on standard suspension (an adaptive setup was a £695 option when new), fine control of body movements along uneven roads.

The steering is rather slow but weights up as you apply lock to foster a reasonable sense of what the front tyres are doing, so all in all the A35 is a breeze to drive swiftly along a tortuous back road. But while there are some handling nuances to discover – it’ll trim its line into a corner if you lift off the accelerator and will shift drive front to rear to help stop it from running wide on the way out – it’s more staccato than fluid. There’s no denying its effectiveness, but it’s hardly effervescent.

The M140i is just the opposite. The optional adaptive suspension (a £515 extra when new) fitted to our test car allow a little too much vertical movement in Comfort mode along bumpy country roads; it feels less hunkered down as a result, often still recovering from the first bump as you encounter the next. Stiffen up the suspension in Sport mode and you lose that excess movement but also the suppleness to absorb the initial hit fully, leaving you somewhat betwixt and between. 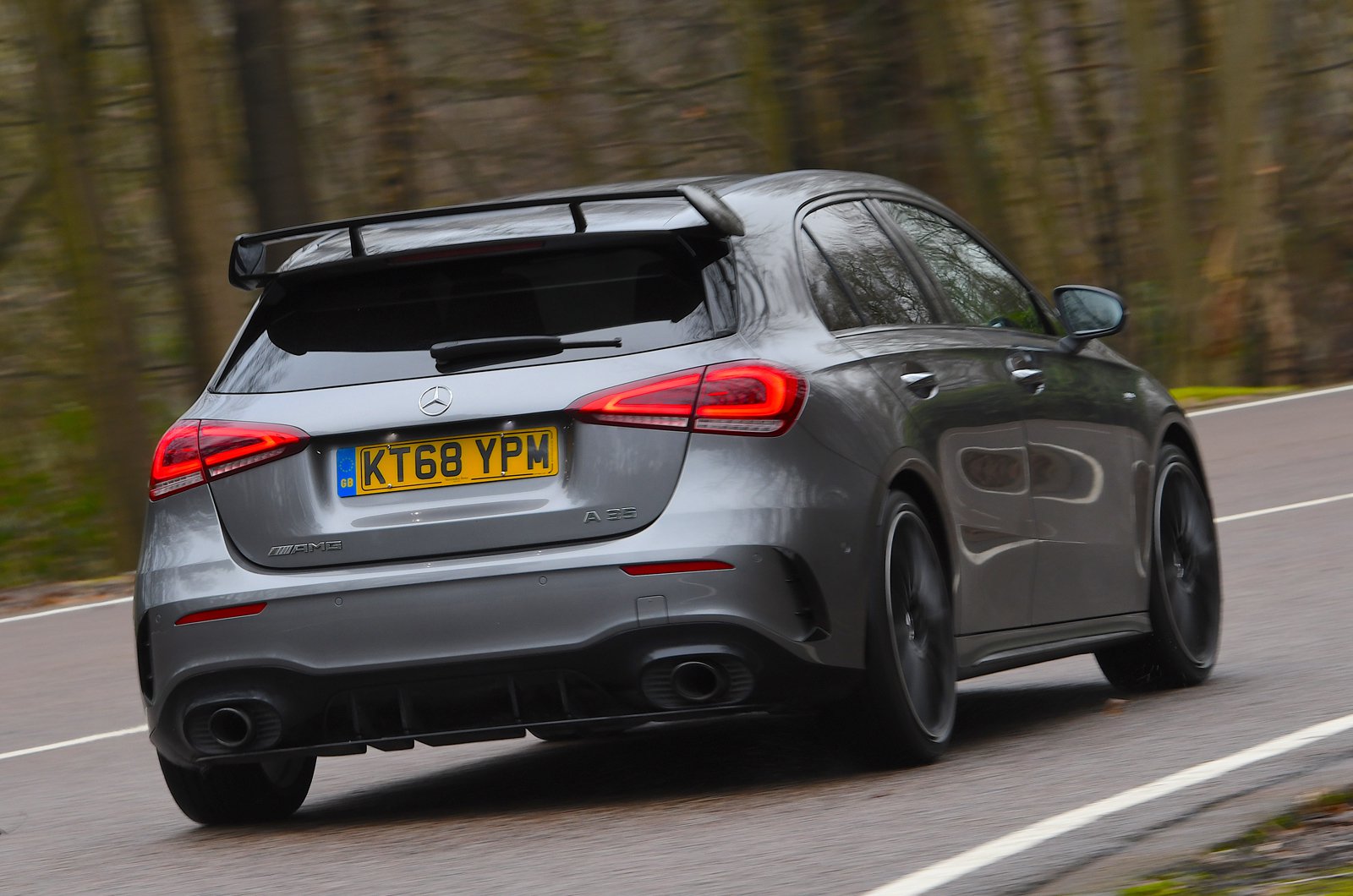 The M140i initially feels more eager to turn in to corners, thanks to its quicker and more precise steering, but without the well-judged heft of the A35’s wheel, it’s far from perfect. Despite all this, though, deep down the M140i is a proper driver’s car. This is not a point-and-squirt job like the A35; instead, it requires you to think hard about your accelerator and steering inputs and concentrate on finding the groove. When you do, the dopamine hits are higher.

The rest of the time, when you just want to relax, the M140i settles better into the role of an accomplished mini grand tourer. That softer Comfort mode for the suspension becomes just the ticket for removing the sting from bumps around town and ridges on motorways, but while the A35 is certainly firmer, it’s no bone-shaker. It’s quieter at 70mph, too, mainly because it generates less wind noise, although both cars, riding on relatively big wheels, suffer from some tyre roar.