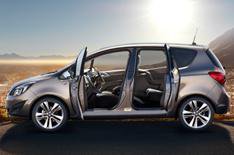 The Vauxhall Meriva's innovative cabin and rear-hinged door system have been revealed in the first official interior photos of the company's all-new MPV.

With the instrument panel lowered and moved forward, there is now increased space for front-seat occupants claims Vauxhall, along with slimmer front windscreen pillars and larger quarter-light windows to enhance visibility.

Rear-seat passengers will also get better visibility due to a lower window line.

Flexrail adaptable storage
Vauxhall's Flexrail system allows the centre console to be adapted and reshaped to fit in with the occupants needs whether it's a space for an iPod or colouring books for the kids. The storage area has been increased by raising the gearlever and replacing the traditional handbrake with an electric park button.

Parents with small children also benefit from the larger door opening, with the extra space around the door pillars allowing better access to child seats. The Flexdoors can be opened only while the car is stationary.

We originally saw this car in concept form at the Geneva motor show 2008.

Performance and handling
With an engine line up of six turbocharged units, producing between 74- and 138bhp, the new car has an average CO2 reduction of 25g/km across the range compared with the previous model. A greener Ecoflex model will also be made available.

With a longer wheelbase and its wheels set farther apart, the new Meriva will also bring a marked improvement in ride and handling over previous versions, says Vauxhall.