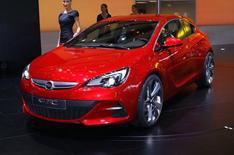 GTC Paris
If you want to know what the next-generation, three-door Astra Sport Hatch will look like when it goes on sale next autumn, get a load of this GTC Paris concept car.

It's pretty much everything we can expect from the three-door small family car, although the poetry embossed onto the concept's seats won't stay.

Vauxhall has etched the line 'The speed was pure beauty' from Jonathan Livingstone Seagull onto the seats in six languages to show the inspiration for the car.

Vauxhall wants the three-door Astra to be much more than just a smaller version of the five-door. 'We won't take a Russian doll approach,' says designer Mark Adams.

Despite the car's coupe looks, Vauxhall claims it's a proper five-seater, although the rear of the cabin is rather snug and you might get some complaints if you put three six-footers in there.

Hot, hot, hot VXR version
Rumours are that the hot-hatch VXR version of the next Astra three-door will have 300bhp when it goes on sale shortly after the standard car, so it will easily have the pace to match the looks.

From pace to space
Also making its first show appearance at Paris is the new Astra estate, which is called the Sports Tourer. It is available to order now from 16,575, and goes on sale at the end of October. Its better equipped than the previous Astra Estate, and has 30 litres more boot space - 500 litres.