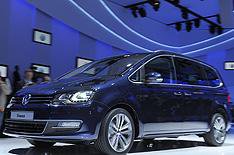 This is the new Volkswagen Sharan, making its debut at the Geneva motor show today.

The seven-seat MPV is longer and wider than the model it replaces and comes with sliding rear doors.

Power comes from a range of four engines:

All versions, apart from the high-powered petrol engine, come with Stop-Start, which helps fuel economy.

The centre row has three individual seats that can be moved by up to 160 mm back and forth if required and, when not in use, can be folded to create a flat loadspace.

VW says the new Sharan's third row of seats is large enough to accommodate adults as well as children. As with the second row of seats, they can also be folded flat into the floor when not required.

The car will go on sale in the UK later this year, exact dates and prices will be confirmed later.****