* New sporty trim for V40 * R-Design styling touches inside and out * Lowered suspension for sporty feel... 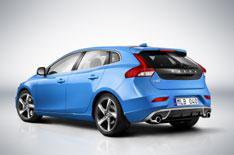 This is the Volvo V40 R-Design, a new version of the premium hatchback, which will be launched at the Paris motor show later this month.

The interior is part-Nubuck, part-leather, with R-Design details throughout the cabin.

The R-Design trim is available with any of the V40's engine line-up, including a new 250bhp T5 turbocharged petrol engine that joins the range at the same time as R-Design.

The car is available to order now, with deliveries due in January however prices won't be revealed until next month.