More for you |
The best deals on our most in-demand carsThe best new car leasing deals on seven-seatersThe secrets of washing your car to perfection2021 BMW iX3 electric SUV revealed: price, specs and release dateShould I ditch my diesel-engined Porsche?
Home
News
What the car makers say
news

What the car makers say 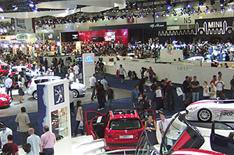 So why did the likes of Audi, BMW and Volkswagen, who collectively sold a quarter of a million cars in this country in the first seven months of the year, stay away from London when they are happy to go to Paris?

In a word, budgets. While A-list shows like Paris are funded out of manufacturers' central marketing pools, attending an event such as the one in London has to be paid for by the local importer, and the cost runs into seven figures.

An official VW statement said that with increasing pressure to offer customers better value, it undertook a careful study of how to spend its resources.

After evaluating the 'costs and benefits' of attending, it decided to stay away.

Audi used pretty much the same words in its statement, adding that it put four new or soon-to-be-launched models on display at the Goodwood Festival of Speed in July.

BMW has chosen to pump marketing money into the O2 arena, just across the Thames from Excel, rather than go to the show. 'A three-year deal there cost us almost penny-for-penny what we would have spent on a fortnight at Excel, and we will reach a lot more people,' said BMWs Mark Harrison.

Valid reasons all but not guaranteed to appease those show visitors who felt short-changed by the absence of some top brands.

'The public want them there, the press want them there and hopefully we've demonstrated that the event merits them being there,' said Imie. Oh, well theres always 2010, or a Eurostar over to Paris.

Let us know your thoughts by clicking [](mailto:whatcarpoll@haynet.com?subject=Have your say)here