Like its fellow French supermini, the Peugeot 206, the Renault Clio lives or dies by its looks. It's far from the most talented car in its class, but if you love its appearance, you'll forgive it almost anything.

In many ways, its strength is its weakness. The same cute lines and diminutive shape that make it so easy to thread through tight city streets also mean the cabin and boot are rather cramped. To make matters worse, the height-only adjustment on the steering wheel, plus the soft seats, give an uncomfortable driving position, especially for tall drivers.

With the exception of the Renaultsport 172, which is a credible hot hatch, the Clio's drive puts the emphasis on comfort. The smooth ride absorbs lumps and bumps well, although one consequence of the springy suspension is obvious body roll in bends, while the steering gives too little feedback to satisfy a keen driver. 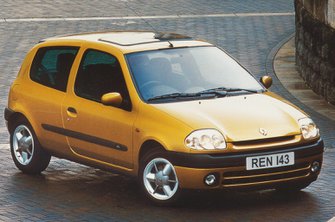