It’s out with the petrol-powered Seat Mii city car, in with the Seat Mii Electric. If you think that the new Mii Electric looks the same as the outgoing Mii, apart from the ‘Electric’ badging, you are quite correct. And, if you think this car also looks like the Skoda Citigo and Volkswagen Up, well, you’re right there too.

The Up, Citigo and Mii were all released in quick succession back in 2012 – three virtually identical, very impressive city cars that were created as a joint effort by the mighty Volkswagen Group. These days, though, it’s difficult to make money at this end of the market, so, with city car sales dwindling and interest in electric cars rising, all three of these cars are getting electric makeovers.

We’ve already seen an electric Volkswagen Up; dubbed e-Up, it proved rather underwhelming. With a limited real-world range and sky-high list price, it really wasn’t recommendable. By contrast, though, this Mii Electric looks to have the crucial elements to be a success. Chiefly, a claimed electric range of 161 miles and one of the lowest price tags for an electric car.

But is it the most impressive small electric car on sale? Are there any drawbacks to it? And what’s it like in key areas compared with other electric rivals such as the Renault Zoe?

Read on to find out. And to get a great deal on any new car make sure you check out our New Car Buying pages. 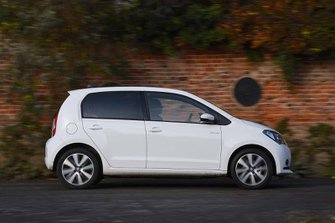 Best version of the 3 Crossback, but the Kia e-Niro and K...