People who want a used off-road vehicle that’ll climb every mountain, and ford every stream, have often had to resort to buying a heavy, cumbersome Land Rover or Toyota Land Cruiser to fulfil their needs. However, those looking for similar mountain-climbing abilities but in a smaller package should look at the Suzuki Jimny: a real 4x4 with dinky dimensions and bargain price.

The other point in the Jimny’s favour is that it has few rivals. When it came out, it had to tackle tricky terrain against the likes of the Daihatsu Terios and Mitsubishi Shogun Pinin. But the Shogun Pinin was never replaced when it went off sale in 2006 and Daihatsu left the UK market back in 2009, leaving the Jimny to traverse the small-SUV market with few challengers.

There's certainly no doubting the Jimny's ability off road, but it's far less happy on Tarmac, and this has always prevented it from winning group tests with more road-biased small SUVs. It's very unrefined and, on anything other than a perfectly smooth road, its ride is firm and bouncy. The body rolls too much in bends, so don’t try any enthusiastic driving after lunch, otherwise you’ll be testing out how stain resistant the seats and carpets are.

What’s more, the Jimny has always been lumbered with underpowered petrol engines. The original 1.3 only produced 78bhp when it was launched back in 1998. It was breathed on for the 2005 facelift, but power was only increased to 83bhp. Hardly earth-shattering, and it’s the reason why the four-speed automatic version takes a ponderous 17sec to reach 62mph.

To cap it all, the Jimny is also narrow and very impractical. Drivers over six feet tall will find leg room tight, and both head and leg room are so cramped in the back: it's better to treat the car as a two-seater and fold down the rear seats to extend the tiny boot.

The interior isn’t exactly plush, either, but it is very tough and can withstand abuse and muddy boots better than you’d think. Early JLX cars were spartan in offering merely roof rails, electric windows and electric mirrors. Later SZ3 and SZ4 versions were much better equipped and easier to use, with three buttons on the dashboard replacing the rudimentary separate selector by the gearlever. 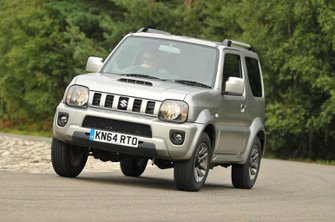