The Suzuki Swift might not be one of the biggest selling small cars, but there’s still much to like about it. For a start, this version has always been one of the more exciting cars in the class to drive. What’s more, it’s reasonably spacious and pretty save, as shown by its five-star Euro NCAP crash test score.

Initially, just one petrol engine was offered – a 1.2-litre rated at 92bhp – and while its vital statistics show 0-62mph taking 12.3 seconds, it feels much livelier than that. True, the Swift is at its best around town, but it’s also fairly quiet and smooth on the motorway, by small-car standards. The five-speed manual gearbox is good to use and encourages you to get the best out of the car while the steering is well weighted and direct.

The petrol was later joined by a 1.3-litre diesel, though only as a five-door model, but its performance isn’t great and it is much noisier.

For performance car enthusiasts, the 1.6-litre Sport is the one to go for. It arrived in 2012, and with 136bhp, it is significantly quicker than the 1.2 with a 0-62mph time of 8.7 seconds. It also handles brilliantly, and yet despite being so much fun is perfectly capable of returning over 40mpg if all the performance isn’t being used.

While there’s much to like about the Swift, there are a few things to dislike, too. Its interior plastics aren’t up to class rivals such as the Ford Fiesta or Volkswagen Polo, and while it is available with five doors, accommodation in the rear is tight for larger adults. Its main Achilles’ heel though is a boot that is notably smaller than the class leaders. It also has a high lip, and while the rear seats have a split-folding function, they don’t fold flat, as they do in many rivals.

A facelifted model arrived in 2013 with some styling revisions and a boost in equipment, and in 2014 the diesel engine was dropped in favour of a 1.2-litre Dualjet petrol that offered similar performance but with lower emissions. Find a used Suzuki Swift in the What Car? Classifieds here 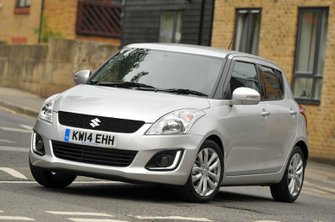