MPVs might have fallen out of favour in recent years as people flock to trendy SUVs, but when the second generation of Vauxhall Zafira was launched in 2005, the market was positively booming.

As with the original, the Zafira is essentially a stretched version of the Astra hatchback with a more upright body that allows enough space for a pair of seats to fold out of the boot floor. Tuck them away, however, and the boot space is vast, while a one-piece sliding rear bench means that those in the second row have plenty of leg room.

Admittedly, newer people carriers are more flexible still with their clever cubby holes and individually sliding rear seats, but for its time the Zafira was impressive, particularly considering its low asking price.

Being based on a hatchback means the Zafira is also pretty decent to drive, resisting excessive body roll in corners and gripping well. And if the basic petrol or diesel models feel too slow, there’s always the unlikely 237bhp VXR to consider, although you’ll have to be prepared to accept a ride that’s considerably firmer than in other Zafiras.

The raised driving position and good all-round visibility also find favour with owners, as does a five star Euro NCAP crash test rating, although it’s worth noting that curtain airbags weren’t standard across the range until 2007.

The reason Vauxhall sold so many Zafiras, however, and indeed the reason it remained on sale for three years alongside its theoretical replacement, the Zafira Tourer, was that it was so keenly priced when it was new. And that’s an advantage it carries into the used car market, whether you’re looking at an early car or one of the post-2009 facelift models. 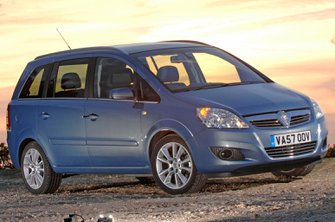