Back in the 1980s, the chic VW Golf Cabriolet was almost as iconic as the filofax, and it provided the aspirational motoring masses with high-quality, drop-top motoring. The fun lasted until 2002, when dwindling sales rather put paid to things, but with the re-emergence of the desirable Golf in competent Mk5 form in 2005 the good money was always on another cabrio version turning up again sooner or later. In fact, we had to wait until 2011 for this car, but turn up it did, once again offering all the good things we’d come to love in the regular Golf and then adding in the extra glamour of a soft-top.

You could initially choose from a healthy range of engines too, with four petrol units, comprising the 1.2-litre TSI 104bhp, two 1.4-litre TSIs in 158 and 120bhp variants, and a more high-performance 2.0-litre TSI with 207bhp, all complemented by two diesel engine options, a 1.6-litre with 104bhp and a 138bhp 2.0-litre TDI version.

There were initially three trim levels available, with S, SE and GT on offer. A GTI version was also available, and from 2013 even an R Cabriolet was briefly sold in limited numbers. Standard kit from the S model included 16in alloys, a DAB radio, climate control, Hill Climb Assist, reach and rake steering adjustment, electric door mirrors, height-adjustable seats and Bluetooth. There are plenty of optional packs to choose from including the performance pack that comes with extra details such as stainless steel pedals and exterior chrome details or technology pack with auto windscreen wipers and auto headlights. The R is distinguished by a gloss black grille and rear diffuser, side sill extensions, tinted light clusters and 18in alloy wheels, with 19s as an optional extra.

The Golf Cabrio is a surprisingly refined car, too, much like the regular hatchback. It remains so whether the roof is up or down, an operation that can be completed in just nine seconds. It also rides well, although the lower GT and GTI models do thump into potholes and road irregularities, and the overall effect can be quite jarring. The flip side of this is that it steers and handles really well, with nicely weighted steering and a taut chassis. Keen drivers will like it. The six-speed manual and the seven-speed automatic gearboxes are both smooth and work well.

Inside is a roomy interior of typical Golf quality. The dashboard is built from upmarket-feeling materials and is laid out almost ideally, with all the major controls right where you need them to be. The driving position is multi-adjustable and visibility very good, despite the folding roof obscuring a little to the rear.

For many years the Golf Cabrio ran alongside its sibling the Eos, a folding hard-top convertible that was good and solid to drive but weighed in heavier than the Golf, despite sharing most of its oily bits. Alas, a fall in demand for convertibles generally saw the Golf Cabrio’s life end in 2016, with VW instead pointing buyers towards its Beetle Cabriolet. 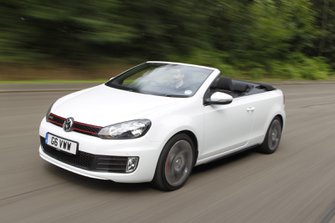