Even in the hard-fought and business-like compact executive car market it helps to have a little style. True, it’s been the all-round competence and the sheer class of cars like the BMW 3 Series and the Audi A4 and the Mercedes-Benz C-Class that have made them so successful in this sector, but catching your neighbour’s eye also plays a large part here - you’ve either worked very hard for or paid a lot of money for one of these, so you want people to be impressed by your purchase, right?

Enter the Volvo S60, a handsome saloon in the Scandinavian style that over the years has made a surprising and sound alternative to the usual German suspects. In true Volvo fashion, it majors on comfort and safety, but dig deeper and it turns out to be a very likeable car in a number of different areas, and one that is also very easy to live with. As a used buy, there are some keenly priced cars that undercut those rivals and could potentially offer many years of pleasurable motoring, too, so the S60 turns out to be more than just a pretty face.

This second-generation car was launched in 2010, and has been offered with a choice of petrol or diesel engines, manual or automatic gearboxes, and the option on some models of four-wheel drive. Initially, you could choose from a 1.6 150bhp T3 or a 180bhp T4 petrol, or a punchy 304bhp 3.0-litre T6 turbocharged unit. On top of that, diesel offerings ranged from a 1.6 D2 version with 113bhp through to two, 2.0-litre diesels in D3 and D4 forms, up to a 2.4-litre, five-cylinder D5 with 213bhp. In 2013 Volvo gave the S60 a facelift, and took the opportunity to upgrade the car with a new range of lighter and more efficient 2.0-litre petrol and diesel engines.

Likewise, trim options have varied over the course of the S60’s long life. The range has for the past few years been divided into these five trim levels: Business Edition, SE Nav, SE Lux Nav, R-Design Nav and R-Design Lux Nav. Each model is reasonably well equipped. The entry-level Business Edition offers cruise control, automatic wipers and lights, rear parking sensors, and hill start assist, while inside there is climate control, electronic windows and a 7.0in touchscreen infotainment system complete with DAB radio, Bluetooth and sat-nav.

Upgrade to the SE Nav model and there is a touch of chrome, leather upholstery and 17in alloy wheels, while the SE Lux Nav trim adds keyless entry, xenon headlights and electrically adjustable driver's seat. The R-Design Nav and R-Design Lux Nav models add some sporty details including a rear diffuser and a lowered sports chassis, while the latter receives a rear spoiler and leather clad sports seats. As you might expect, Volvo doesn’t discriminate when it comes to safety kit. City Safety, which reduces the severity of low-speed shunts, a stability control system and a myriad of airbags in the interior are all fitted across the range.

On the road, the lowest-powered of the diesels, the D2, feels a bit slow. The D3 feels altogether more punchy, though, while the four-cylinder D4 is a great choice. It is powerful, refined and efficient. However, note that the 2.4-litre D4 isn’t as quick as the 2.0 D4, partly because of the extra weight of the four-wheel-drive system it comes with as standard. It’s not as refined, either.

Approach a corner and you’ll find excellent brakes, quick steering, plenty of grip and crisp handling, even if it’s not quite as communicative as rivals such as the BMW 3 Series and Audi A4. The ride is set up on the firm side, but it’s still comfortable most of the time - R-Design versions get a firmer set-up still that can thump over broken road surfaces, though. It’s fairly refined at a cruise, too, although again one or two of its rivals are even quieter still.

Inside is an interior of classy coolness. The driving position is excellent (if a little on the high side), and the steering column adjusts for reach and rake, so it’s easy to get settled. The driver’s seat deserves special mention; it’s supportive, but also accommodating and comfortable. The solid construction and use of plenty of soft-touch materials make it feel opulent, and this is clearly a high-quality interior and a pleasant place to sit.

Space up front is plentiful, but taller rear passengers might have to duck slightly to avoid their heads brushing the rooflining, a result of the car’s swoopy rear profile. Three can sit abreast at a pinch, but the central passenger won’t want to be there for long. The S60’s boot is a useful size, though, even if it’s significantly smaller than those of key rivals such as the BMW 3 Series. The opening is large, however, while the split-folding rear seats make it easier to carry longer items. 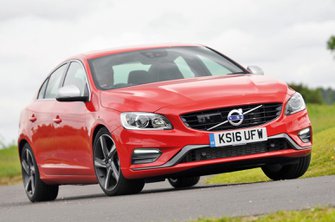