The A8’s engine line up is refreshingly straightforward, Audi offering buyers the choice of a 335bhp 3.0-litre V6 petrol (called the 55 TFSI), a plug-in hybrid version (called the 60 TFSIe) that pairs the same V6 petrol engine with a 126bhp electric motor for a combined total power output of 443bhp, and finally a 282bhp 3.0-litre that runs on diesel (badged 50 TDI).

The diesel is smooth and quiet, if not quite as refined as the 400d engine of the rival Mercedes S-Class. It isn't as powerful as that engine, either, although performance is more than adequate and there's a healthy swell of acceleration from low revs.

Whichever engine you choose, you get an eight-speed automatic gearbox. In the petrol and diesel, it can be frustratingly slow-witted. Whether you’re at a standstill or on the move, there’s often a delay between you pressing the accelerator pedal and the A8 gaining speed. This isn’t a problem in the plug-in hybrid; the car always saves enough battery so you can pull away using the electric motor, which responds immediately.

Every A8 has Audi’s quattro four-wheel-drive system, providing impressive all-weather traction and reassurance, while Vorsprung models also get four-wheel steering. At low speeds, this steers the rear wheels in the opposite direction to the fronts, improving manoeuvrability and making the A8 feel shorter than it is in tight spots, such as multi-storey car parks. At higher speeds, the wheels move in the same direction for greater stability when, for example, changing lanes on the motorway. It’s especially useful on the long-wheelbase model and if you spend a lot of time in urban environments.

While the A8 is easy to drive and very surefooted, its big body wallows on its standard air suspension through bends; it definitely prefers going in a straight line. Put simply, the rival S-Class is much more enjoyable to drive – especially on a road with lots of twists and turns.

But, of course, pointy handling isn't really what the big Audi is all about, and the A8's softer edge has an important upside: it's not only the best-riding car in its class, but one of the most comfortable cars full stop. It simply glides along any stretch of road, seemingly untroubled by all but the most pronounced bumps. Whether you’re sitting in the front or the back, you’ll enjoy unparalleled levels of comfort.

It is worth noting, however, that the plug-in hybrid isn’t quite as supple as the regular car over urban imperfections; the weight of its batteries gives the suspension more to deal with. So instead of being by far and away the best riding car in the class, the plug-in is simply on a par with a petrol or diesel Mercedes S-Class.

We’d recommend opting for the smallest wheel possible (18in wheels are available on base Sport trim) to maximise ride comfort, but the A8 remains surprisingly supple and road noise is well contained even on massive 20in wheels. Wind noise is also kept to a minimum even at motorway speeds and if you want even greater separation from the outside world, you can option double-glazed side windows for a reasonable cost. 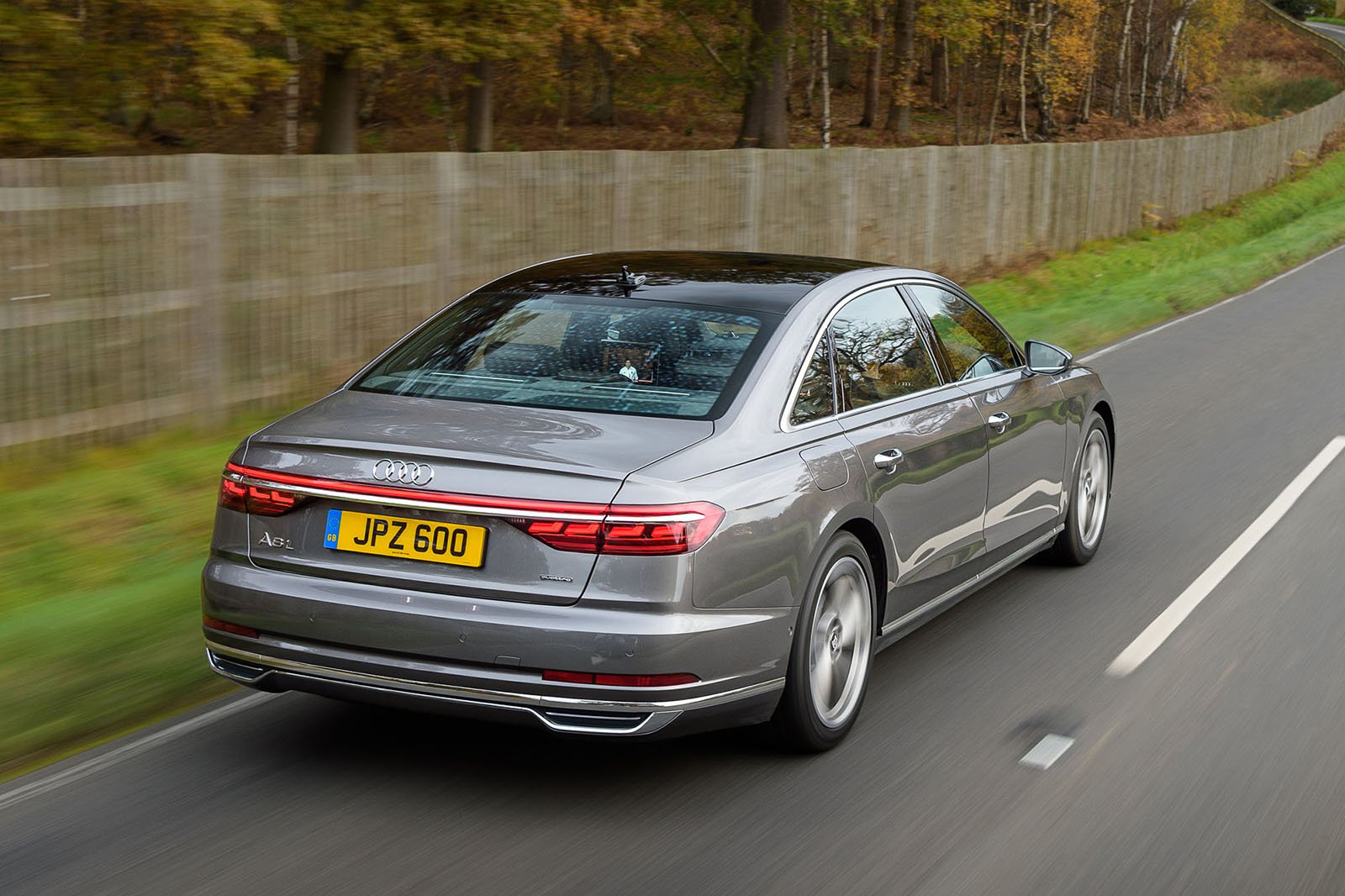