Diesel may have received a lot of bad press over recent years, but, if you're in the market for a Mondeo, it still makes a lot of sense. There’s a 2.0-litre diesel that’s available in two power outputs. The 148bhp version (badged EcoBlue 150) is satisfyingly punchy and flexible, a good match for the mid-range 2.0 TDi 150 diesel engine that’s offered by the Skoda Superb.

It doesn’t actually feel much slower than the 187bhp (EcoBlue 190) option, In fact, the automatic-only EcoBlue 190 can struggle to get that extra bit of power down, especially in the two-wheel-drive version; pulling away sharply can have the wheels spinning a little after the automatic gearbox lurches into life with a bit of a jolt.

If you don't do the miles to justify a diesel, there’s also the option of a 1.5-litre turbocharged petrol engine with 163bhp, although we’re yet to try this. Based on our experiences with previous three-cylinder petrol engines used in the Mondeo, though, it should provide a good balance between performance and efficiency.

Finally, there's a hybrid version that's only available in saloon (rather than hatchback) form. Despite its low CO2 emissions of 92g/km, this version of the Mondeo is best avoided because its performance is mediocre and its petrol engine and electric motor struggle to work smoothly together.

Unlike the Skoda Superb and more expensive executive rivals such as the Audi A4 and BMW 3 Series, the Mondeo isn’t offered with adaptive suspension. Instead, you get conventional springs and dampers that do a good job regardless of the road surface – particularly if you opt for a version with smaller alloy wheels. The suspension soaks up big bumps and small ruts alike, leaving you well isolated from the road surface beneath.

ST-Line models are equipped with sports suspension and chunky 19in wheels, and don't ride nearly as well. Likewise, the range-topping Vignale model also rides on 19in wheels and isn't as comfortable as cheaper versions. 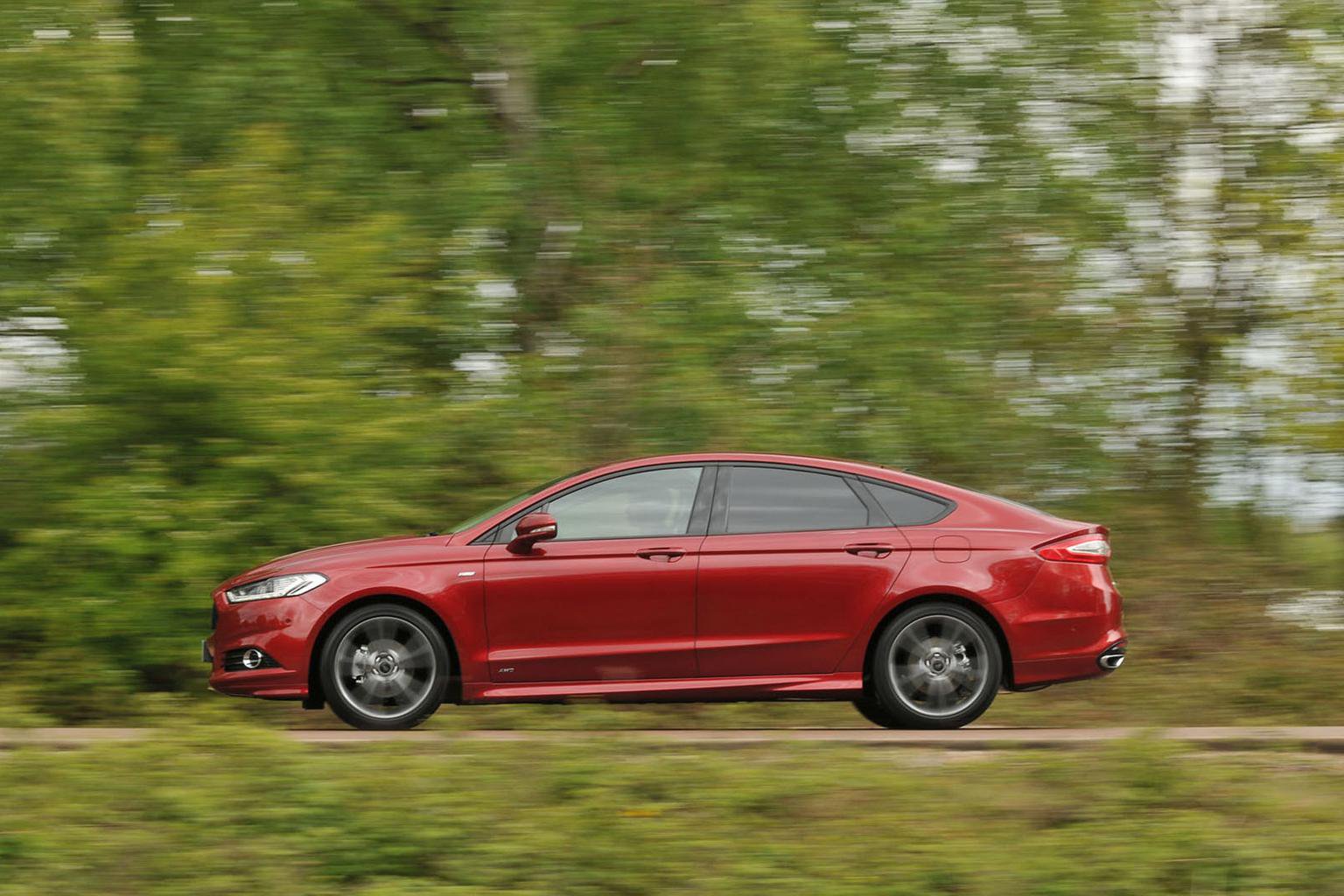 The Mondeo handles really well for such a big car; it feels agile, turning in to corners eagerly and staying planted and upright through tight twists and turns. It also feels very stable at high speeds – a good thing, given the high number of motorway miles that Mondeo drivers tend to rack up. It’s also worth noting that this wieldy handling comes without reliance on the adaptive suspension that the 3 Series and Volkswagen Passat both need in order to really shine.

It’s just a shame that the steering, while precise in its responses, is a bit light at times and too keen to self-centre at others, so it doesn’t give you a great sense of how well the tyres are gripping the road.

The diesel engine is particularly hushed, its muted low-rev grumble quickly fading to a distant hum when cruising on the motorway. Little vibration makes it through to the steering wheel and pedals, either. There’s also minimal wind noise, although road noise is noticeable at high speed.

The six-speed manual gearbox has a light and precise – if fairly long – shift action and makes it easy to drive smoothly. The automatic, though, tends to hesitate and then shunt, especially when trying to build speed. It’s jerky and leaves you waiting when you ask for a quick burst of pace.