Just because a car has a futuristic electrified engine, it doesn’t have to look like something out of science fiction. The Kia Niro is proof of that.

Unlike the Toyota Prius and Hyundai Ioniq, the Kia Niro looks rather conventional; some might say, in fact, that it’s somewhat dull. As a result, it’ll appeal to buyers who want to drive a hybrid or electric car but don’t want something that looks odd.

As with the Ioniq (with which the Niro shares its underpinnings), you get three engines to choose from. There’s a traditional hybrid version, which came out in 2016 and doesn't need to be plugged in to a socket to recharge the battery; instead, it charges itself while you drive along. The disadvantage is that you can’t use this model on purely electric power; it’ll always find the best balance of electric assistance to use with the main, petrol engine.

You get the choice of four versions of this model, although the cheapest 1 trim was phased out soon after the car’s introduction due to poor sales. The 2 gets sat-nav, dual-zone climate control and a reversing camera; 3 adds leather upholstery, heated seats and a heated steering wheel, while 4 adds xenon headlights, adaptive cruise control and an electrically adjustable driver’s seat.

Then there’s the plug-in hybrid (PHEV) model, which came out in 2017; this version charges itself too, but not as efficiently. Instead, to get the best out of it, you need to plug it in to charge it up – although, if you do this, you can run it on electric power only for, Kia claims, 38 miles before the petrol motor kicks in, saving yourself petrol money in the meantime. There’s only one version of this model, which gives you leather upholstery, adaptive cruise control, heated front seats and sat-nav as standard.

A fully electric version arrived in 2018, called the e-Niro, and it's fair to say it came as a bit of a breakthrough. It shares all the good features of the regular Niro, in that it's handily sized outside and roomy inside, but it comes with a range that will embarrass many more expensive electric cars. In our Real Range test, it achieved 253 miles in real-world use – a great figure for a family-sized electric car and one rivalled only by its slightly smaller cousin, the Hyundai Kona Electric.

The PHEV is near-silent when running only on batteries and still quiet in petrol-electric mode, as is the regular hybrid, with engine noise only becoming strident when you really press on.

Neither of those versions handles in a particularly exciting way, but body lean is well controlled and steering is reasonably crisp and responsive. And while the ride is a little stiff around town – you’ll want to avoid versions with bigger wheels, which exacerbate the problem – it smooths out nicely on the motorway to deliver plenty of long-distance comfort. If anything, the all-electric e-Niro handles more confidently and rides better, due to its weight being concentrated further down.

Inside, you’ll find there’s loads of space in both the front and rear seats. The plug-in version has to make do with a shallower boot, because space below the floor is taken up with the battery, but this at least gives it a load lip that’s flush with the boot floor, making it very easy to load heavy boxes.

While the dashboard isn’t exactly the most stylish in the world, it all feels reasonably classy, with slick, easy-to-use controls and one of the most intuitive touchscreen infotainment systems out there.

In 2019 the Niro range received a facelift, with a new front and rear design including daytime LED running lights, tweaked bumpers and updated wheel trims. The interior is updated, too, with a new dashboard design and larger infotainment screens.

Also new on this revised Niro is Kia’s UVO Connect Services. Mimicking many premium manufacturers’ take on ‘live’ connected services, the Niro can now provide real-time information on the traffic and the weather. There’s a downloadable smartphone app, too. 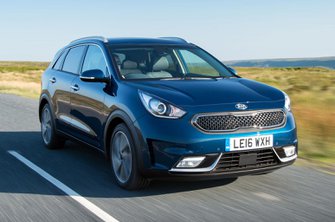