At the bottom of the Kia Rio range is a 1.25-litre petrol engine (badged 1.25 ISG) with a meagre 83bhp; we suspect this will feel out of its depth out of town, but we're yet to try it. Next up is a 1.0-litre three-cylinder with 99bhp (badged 1.0 T-GDi), and this is our pick of the lineup. It’s as flexible as the small turbo engines you’ll find in the Ford Fiesta and Skoda Fabia and has the legs to sit comfortably at motorway speeds.

You can also opt for a more powerful 118bhp version of the same 1.0-litre, three-cylinder engine, badged 1.0 T-GDi 48V. The latter bit of its name signifies that it uses mild-hybrid technology; there’s a small electric motor and battery to add a little electrical ‘kick’ to the engine as you drive around. The assistance it provides is very mild, however, and you won’t notice it unless you’re pushing on particularly hard, so we don’t think it’s worth the additional outlay.

The entry-level 1.25-litre petrol engine comes with a five-speed manual gearbox as standard, whereas both 1.0-litre engines come with the choice of a six-speed manual or a seven-speed automatic.

Rios of old were sometimes criticised for being too stiff, and Kia has made an effort to improve things here. The car’s still not what you’d call supple, though; at low speeds, you’ll feel the surface of rough urban roads through the base of your seat in all too much detail, with every pothole causing a real thump.

Things improve at speed, but even on roads that look smooth, you’ll feel yourself moving up and down more than you would in rivals. The larger 17in wheels of top-spec models make things even worse – we’d stick with the 16in wheels or smaller. 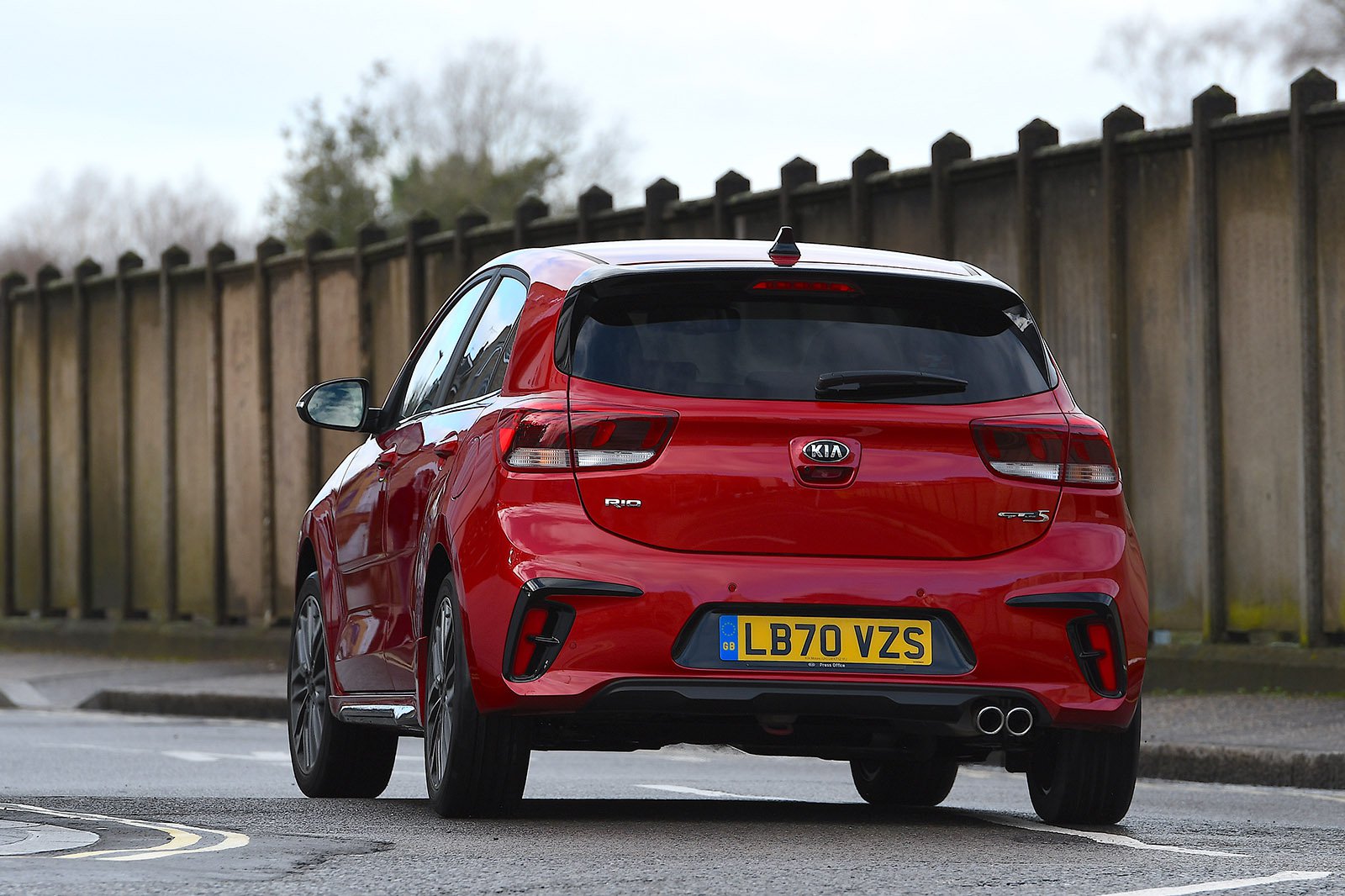 One upside of the ride’s distinctly firm edge is that the Rio stays nicely upright even when taking on winding country roads. Its steering is quick, too, making the car feel quite darty when turning into a bend.

However, what you won’t find through the steering wheel is much feeling as to what the front wheels are doing. For a more enjoyable driving experience, a Fiesta is far more fun.

The Rio’s three-cylinder turbocharged engines are among the more refined of their type. There’s very little vibration, even at idle, and they’re quiet unless you work them really hard. Past 4000rpm, the Fiesta’s Ecoboost engines are better, but you’re only likely to push that hard on the odd occasion.

As we mentioned earlier, the hybrid also features a clever ‘clutch-by-wire’ iMT manual gearbox, which allows the car to automatically coast when you’re not on the accelerator, without you having to depress the clutch yourself. It's said to contribute to the mild-hybrid engine’s greater fuel efficiency, but for us, the really clever bit is that it hardly feels any different to the non-hybrid car’s conventional clutch; the pedal has a consistent weight throughout its travel and the biting point is always in the same place. The mild-hybrid’s start-stop system is impressively smooth, too, making it a relaxing companion for inner-city driving.

At motorway speeds, the turbo engines are hushed, but there is a fair bit of road and wind noise. That said, with the exception of the hushed Polo, small cars aren’t generally the quietest at speed.