The second-generation Kia Sorento of 2010 was something of a departure from the original. Gone was the ladder frame chassis, low-range gearbox and 3500kg towing limit; in their place, a much more comfortable, family-friendly SUV, not to mention one that benefitted from Kia’s new seven-year, 100,000-mile warranty.

Among the engine line-up were a 2.0-litre diesel with 147bhp, which came only in entry-level trim with front-wheel drive and five seats rather than seven, and a 2.4-litre petrol with 172bhp, which was as thirsty as it sounds - not to mention expensive to tax. As such, most buyers opted for the 194bhp 2.2-litre diesel, which is why you’ll see vastly more of these on the used market today.

Although not as rugged as its predecessor, the Sorento (which is closely related to the Hyundai Santa Fe) can still tow up to 2500kg if fitted with the six-speed manual gearbox or 2000kg with the six-speed automatic, and the third-row of seats offers enough space and sufficiently easy access to accommodate adults as well as children.

Unlike many cars of this type, the Sorento is even big enough to retain boot space for a couple soft bags even when all of the seats are in use. Fold them away and there’s the storage to match the best estate cars, with the Sorento able to swallow a couple of large suitcases with lots of room to spare. A flat loading lip and second-row seats that fold away also mean that it’s good for carrying longer items.

Three adults can sit abreast in the rear seats without any complaints, and the reclining backrests will help everybody to get comfortable. The dashboard layout, meanwhile, is perfectly functional, if not particularly exciting.

The same can be said of the driving experience, for while this generation of the Sorento is markedly better than its predecessor for on-road dynamics, it's still a big, heavy SUV with relatively soft suspension, so it leans over through corners and its automatic gearbox is fairly sluggish by modern standards.

However, there is plenty of grip; what’s more, the 2.2-litre diesel engine is quiet once up to speed and pulls well, even when the car is fully loaded. And despite its more road-biased setup, the Sorento will still cope reasonably well with a bit of off-roading, should ever the need arise.

A facelift in 2013 resulted in the slow selling 2.0-litre diesel and 2.4-litre petrol models being discontinued, as were the options of having two-wheel drive or only five seats. Styling and trim levels were tweaked rather than completely overhauled, but there were some notable improvements to fuel economy and CO2 emissions, which make these post-facelift models slightly cheaper to run. 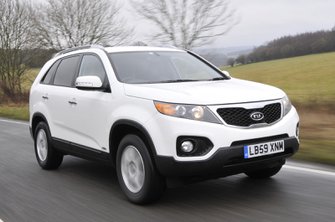