The Mitsubishi Outlander was always a quietly successful car, but that is mostly due to the PHEV plug-in hybrid version that was launched in 2014, the year after this standard car first hit the market. Both cars went off sale in 2021.

Not only did that on-trend hybrid model offer low running costs, it was also priced at the same level as the cooking 2.2-litre diesel Outlander once the Government’s plug-in car grant had been factored in, making it particularly attractive to company car drivers.

Another thing that makes the Outlander popular with families is its five-star rating in the contemporary Euro NCAP’s crash tests. However, for all the car’s technical advances, the dashboard design and finish is fairly crude, and while Mitsubishi boasted that the Outlander’s platform was based on that of the high-performance Lancer Evolution X saloon, it’s far from a sporty drive.

Nor is it all that quiet, particularly if you go for the older diesel model, which uses a relatively old engine that was offered with either a six-speed manual or a six-speed torque-converter automatic. Tyre and wind noise were also intrusive at motorway speeds, and the ride was firm at low speeds, particularly on the more firmly spring PHEV model.

If that’s a concern, it’s worth noting that facelift Outlanders from 2015 have a significantly smoother ride, though they still aren’t in any way sporty to drive, and benefit from an upgraded interior and a smarter grille among other detail changes. The 2019 onwards versions sharpened up the looks and added new technology inside and out.

If you're interested in finding a used Outlander, or any of the other large SUVs mentioned here, head over to the Used Car Buying pages to find lots of cars listed for sale at a great price. 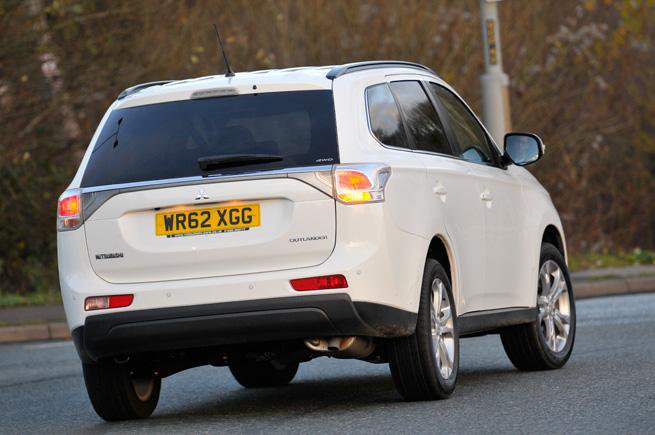