So, you want a luxurious used SUV – but you also want to stand out from the crowd. Not for you the German SUVs that dominate this sector; you want something a little different – something that feels just as upmarket but won’t make you look like a follower of the crowd. Maybe something that comes with hybrid power. And of course, something that’s efficient and dependable. The Lexus RX looks like it could tick all of your boxes – but should you buy one?

Most RXs you’ll find on the used market are hybrids, combining a 3.5-litre V6 with two electric motors. They’re badged RX 450h, and Lexus sold them in lieu of a diesel model; there are no diesel versions available. However, if you don’t want the hybrid, you could always seek out the other engine option, a 2.0-litre petrol turbo, which is badged RX 200t – although these are vanishingly rare.

Variants of the RX kicked off with the most basic S version and topped out with the luxurious Premier model, with SE, Luxury and F Sport versions filling in the middle ground. Hybrid models were also available in a version called F Sport Premier, which took the F Sport’s sporty styling and teamed it with the luxurious trimmings of the Premier model. Confusingly, Lexus also added a version called Sport to the range in 2018. Of these, it’s the Luxury version that was the most popular; expect leather upholstery with heated and cooled front seats, dual-zone climate control, an infotainment system with sat-nav and a 12.3in display, and a powered tailgate as standard, among other features.

The petrol version offers adequate performance, but you have to push it quite hard to extract it, at which point it gets rather noisy. That’s why we prefer the hybrid instead, although even this can be rather vocal if you accelerate hard. Having said that, it’s not an unpleasant sound; meanwhile, at a cruise it quietens down significantly, and around town the petrol motor can cut out altogether to leave you running on electricity only, keeping things even more tranquil.

The RX isn’t exactly a sports car – it leans over through bends and the steering is uninvolving – but it’s nevertheless light and easy to drive, and the soft suspension makes it lollop over all but the most sudden of bumps, smoothing them out nicely. The brakes in the hybrid version can sometimes be a little grabby, though, making smooth stops an art that must be mastered.

Inside, you’ll find a dashboard that feels incredibly solid and looks very appealing, with sweeping lines and some neat styling touches. A few of the materials are a little low-rent, and some of the switchgear is shared with lesser Toyotas, but on the whole the effect is upmarket enough, if not quite up there with the best luxury SUVs.

The same can be said for the seating; both the front and rear seats offer less room than you'll find in most rivals. What's more, where most SUVs of the Lexus’s size these days offer seating for seven, early RX buyers have to make do with five. That said, the seven-seat RX L was introduced in 2018 and remedied this to a point, although even then, there’s more room in the rearmost seats of the Audi Q7, Volvo XC90 and Land Rover Discovery.

While most five-seat luxury SUVs make up for their less versatile seating arrangements with a big boot, not so the RX; you’ll fit far less in the back than you will in a contemporary Volkswagen Touareg or BMW X5 – whether the seats are up or down. 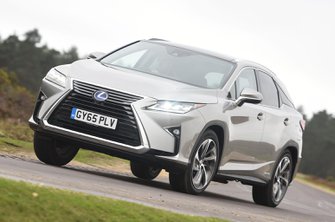