Since 2003, the Volkswagen Touareg has offered buyers of luxury SUVs a less blingy alternative to the premium-badged rivals. Or rather it did. That all changed when Volkswagen launched the current model, which comes with more than a wee splattering of glittery chintz.

Look past the in-your-face chrome grille and there’s a very sensible vehicle underneath, though. For a start it's bigger yet lighter than its predecessor, it comes packed to the roof with tech, and it can tow up to 3500kg.

How is all that possible, you might wonder? Well, the Touareg shares a platform with one of our favourite luxury SUVs, the Audi Q7. And as that car also serves as the foundations for the Porsche Cayenne, the Bentley Bentayga and even Lamborghini Urus sports SUV, the Touareg has the underlying DNA to be a potential world-beater.

Okay, it doesn’t have the same quota of performance firepower as the Porsche, Bentley or Lamborghini, or the seven seats of the Q7 (the Touareg is a five-seater only), but there are a range of engines to choose from, including a 3.0-litre turbocharged V6 diesel in two states of tune, and a 3.0-litre turbocharged V6 petrol. And of course, being a big SUV, four-wheel drive and an automatic gearbox are standard.

But the question is: does the Touareg make the transition from an on-paper marvel to an on or off-road megastar? Keep on reading to find out, because we’ll tell you all about how the Touareg drives, how it looks after passengers and their luggage, how much it costs to buy and run, and whether it’s better at all those things than the competition. Which, by the way, includes the aforementioned Q7 as well as the BMW X5 and Mercedes GLE.

If you want to get yourself a good deal on a Touareg, don’t forget to visit our New Car Buying pages.

Both diesel engines emit a slight rumble when idling and you'll feel mild vibrations through the steering wheel that remind you which colour pump they drink from, but once you're on the move they quieten down nicely. They're very similar to the current Audi Q7's diesels, and more hushed than the four-cylinder diesels in the Volvo XC90.

If diesel isn't your thing, then what about the 335bhp 3.0 V6 TSI 340 petrol? It's by far the smoothest engine, staying creamy and quiet all the way from idle to maximum revs. And if you use all the revs, it's fast, too — 0-62mph is done in 5.9sec — but it also mimics the diesels by pulling strongly from low down. Only the BMW X5 40i petrol feels significantly stronger among its petrol equivalents.

The standard eight-speed automatic gearbox, meanwhile, mostly slurs smoothly between gears but can jolt occasionally. It's also a little hesitant when pulling away, and, once on the move, there’s a pause after you kick it down before it’ll shuffle down a couple of cogs and give you full acceleration – even in the sharper sport mode. That's not great when overtaking.

All Touaregs (except the top-spec Black Edition) come with conventional passive suspension as standard, but this set-up is too firm. Even in SE trim with the smallest wheels it is quite agitated over general imperfections and clumps over harsh potholes. R-Line models, with stiffer sports suspension and bigger wheels, are even less comfortable. We’d suggest adding the optional air suspension (standard on Black Edition), which settles things down; it's quite a pricey option, though, and even when fitted, a Mercedes GLE, Q7 or X5 (also with air suspension) rides better.

For such a big machine, the Touareg steers neatly, with a better sense of connection between you and the front wheels than an XC90. Adding the optional four-wheel steering, which turns the rear wheels in the opposite direction to the fronts at low speeds or in the same direction at high speed, gives you a tighter turning circle (only 20cm bigger than a Golf’s) and greater stability at speed. It's not a must-have addition, though.

If you really want to push the boat out, you can add the Professional Chassis pack. It brings active roll compensation; put simply, this automatically adjusts the suspension's anti-roll bars in an effort to prevent the Touareg leaning over too much when you’re cornering hard. In our view, while it’s effective at removing the body roll, it doesn’t transform the car into a lithe sports car, so doesn't justify the extra cash. 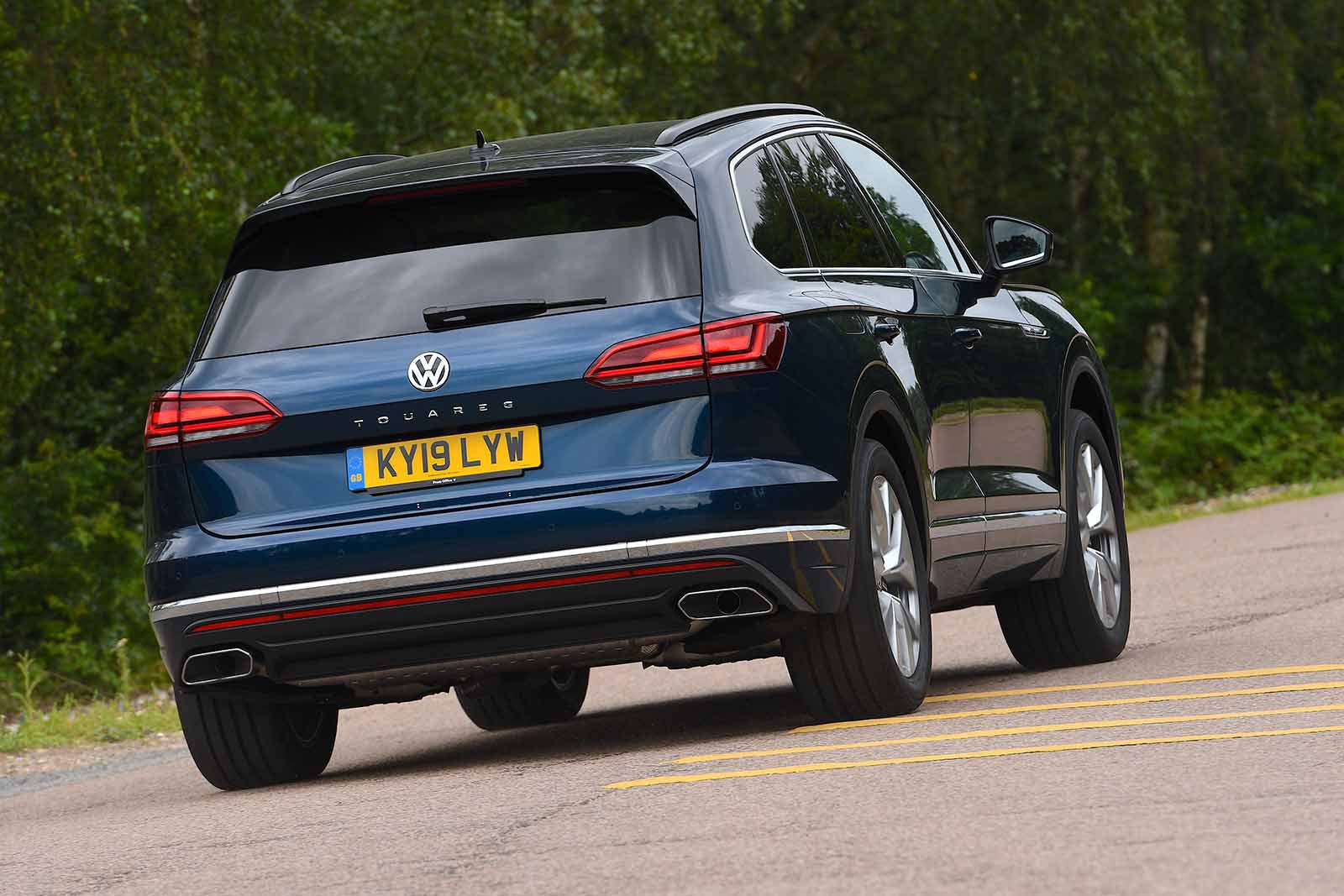