On paper, the idea of a small, premium hatchback like the CT, built by Lexus and harbouring a petrol-electric hybrid drivetrain underneath its compact bodyshell, seems like a very good idea indeed.

To combine modern technology with the reliability and luxury the Japanese firm is known for, and to be able to sidestep the fraught issue of diesel engines, seems very desirable in these uncertain times. But to succeed at this premium price level, a car must still be able to perform like a BMW, have the refinement of an Audi and be at least as desirable as either.

Alas, the CT, which shares much of its hybrid technology with the iconic Toyota Prius, drives rather poorly, with lacklustre performance from its 1.8-litre engine and electric motor which, combined with a CVT automatic gearbox, make the car noticeably unrefined when accelerating. True, it can cruise around town on electric power alone, but not for long, and when the engine joins in, things begin to get too noisy. Add in quite a lot of road noise and a choppy ride that on some of the trims with larger wheels is actually downright uncomfortable, and suddenly the CT seems to lose a lot of its on-paper charm.

Things aren’t much better, perhaps surprisingly, inside the car. It feels well-built and some of the materials look and feel of a high quality, but rivals from Audi and BMW still have it beaten for overall class and finish. There’s enough room up front, but rear passengers will be cramped, especially if they’re tall, and while the boot is a good size, it’s not as practical and as large as those of some rivals.

The CT is an expensive car, too, even when bought used, and although its claimed official average fuel consumption is a healthy 68.9mpg, our experience suggests that you won’t get anywhere near that figure in real-world use.

So, the CT, however well priced a good used example may be, appears to offer some of the refinements of an upmarket compact hatchback but in everyday use is compromised by its drivetrain and unable to match its rivals' better all-round abilities.

Its trump card is its outstanding reliability record, which means a used example should still be pretty dependable, and that peace of mind will be worth a great deal to a great many potential owners. 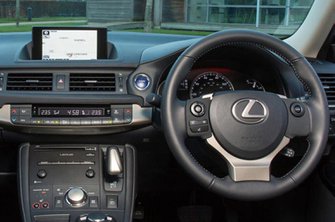