On the face of it, the Mazda CX-5 is an SUV for those who find the Nissan Qashqai a fraction too small and the BMW X3 too expensive. However, this car is actually far better than the halfway house such a description implies.

The CX-5 is different from its rivals in that it’s available only with a 2.0-litre petrol or 2.2-litre diesel engine, rather than a raft of downsized turbocharged petrol units, smaller diesels or hybrid engines. The petrol version has 163bhp and is available with front-wheel drive and a manual gearbox, while the diesel can be had with 148bhp or 173bhp and the option of four-wheel drive and an automatic gearbox.

At launch, the CX-5 was offered in SE L and Sport trims, both of which were well equipped. The SE L features dual-zone climate control, front and rear parking sensors, cruise control and 17in alloy wheels. Sport models add 19in wheels, an electrically adjustable driver’s seat, a reversing camera and a more powerful Bose stereo. SE L Nav and Sport Nav models are available with sat-nav included, while SE L Lux models were introduced in 2013 and included a sunroof and heated leather seats.

The petrol engine needs quite a few revs to get going, but the diesels have loads of pulling power that, combined with precise steering, minimal body roll and lots of grip, makes for an SUV that is surprisingly entertaining to drive. That it manages all this without resorting to a very stiff suspension setup that can ruin a car's the ride is impressive. That said, we’d still recommend sticking with the SE L on its 17in wheels, rather than the Sport on 19in rims, for comfort reasons. Whichever CX-5 you choose, though, our biggest complaint is that there’s rather a lot of wind and tyre noise.

Unsurprisingly, because it was cheaper to buy than premium-badged SUVs of the same size, the CX-5 doesn't feel quite as plush inside. The dashboard design, for example, majors on clear, easy-to-operate controls rather than anything that looks too flashy. It's pretty painless to live with, and the fact that the infotainment screen can be operated via a rotary controller down by the gearlever makes it very easy to use on the move.

There's more room in the CX-5 than in the Qashqai. The boot, for example, will easily hold enough luggage for a family camping holiday, while the rear seats are just wide enough for three people to sit abreast. Head and leg room for all occupants are excellent.

As you’d hope in a family-friendly SUV, safety standards are excellent. In fact, the CX-5 was among the earliest mainstream cars to feature automatic emergency braking as standard across the range. It also outperformed the Honda CR-V and Toyota RAV4 for occupant protection in Euro NCAP’s crash tests and achieved a maximum five-star overall safety score.

In early 2014, Mazda revised the CX-5’s suspension settings to improve ride comfort and reduce road noise, followed in 2015 by a facelift that resulted in improved equipment levels across the range. This included a larger, 7.0in infotainment screen that replaced the 5.8in system and more safety kit, such as the option of blindspot monitoring. 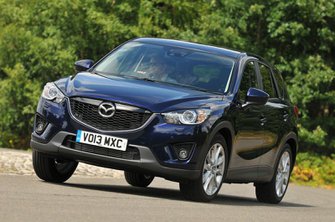