The first-generation Ford Kuga was a stylish car that was generally well-received but some thought, in a hotly contested class that included the likes of the iconic Nissan Qashqai, ranked design a little too highly above function. This second-generation car has been designed to be sold in North America too, and is therefore bigger, more upmarket and competes against a whole new class of larger SUVs and 4x4s than the old model.

Its more conventional shape incorporates, in the facelifted post-2016 cars, Ford’s large SUV corporate grille, and underneath the body is a range of turbocharged petrol and diesel engines with the option of manual or dual-clutch automatic gearboxes and front or four-wheel drive. All are solid, eager performers, and combine that with reasonable economy and efficiency.

There are plenty of trim levels to choose from, too, with entry-level Zetec models offering all of the essentials; air-con, electric windows and cruise control are all standard, although we would be tempted to look for a car fitted with the optional 8.0in touchscreen infotainment system. Moving up to Titanium does bring a few niceties, though, such as the upgraded infotainment system, dual-zone climate control, rear parking sensors, part-leather seats, and automatic lights and wipers. ST-Line models are the sporty option so get a bodykit, sports suspension, 18in wheels, black detailing for the outside, floor mats with red piping and a self-parking system; this not only brings front and rear parking sensors, but also means the Kuga can steer itself into a parking spot.

The range-topping Vignale version gets perpendicular parking assist, a powered tailgate and adaptive xenon headlights as standard, as well as a liberal upholstering of Windsor leather on the seats, interior doors and dashboard.

The 1.5 Ecoboost 120 four-cylinder turbocharged petrol motor is the entry to the Kuga range, and is available only with front-wheel drive and a six-speed manual gearbox. The range-topping 1.5 Ecoboost 182 petrol model comes with four-wheel drive and a six-speed automatic gearbox, so it’s little surprise that its CO2 emissions are pretty high. The entry-level 1.5 TDCi diesel engine may be small in size, but it should have enough grunt for most people. If you regularly have a full car though, the 2.0-litre 150 is especially good.

Where the Kuga really surprises is in its ride and handling, both of which are accomplished to the level where it feels more like a hatchback than an SUV of old, with good body control and agility and neat absorption of bigger bumps and road irregularities. Patched up town roads can cause it to shimmer slightly, but on the whole occupants will be comfortable, a feeling enhanced by the spacious interior, although the use of some scratchy mixed plastics lets the feeling of quality down a little. The boot is of a good size, but one or two in this class have a larger capacity.

A mid-life facelift in 2016 upped the Kuga’s equipment levels. Now, a Kuga with some years behind it and the initial sting of depreciation taken away from it makes a tempting used proposition. It might not be the best all-rounder in its class, but it is both likeable and competitive, and it would certainly suit buyers seeking a large SUV with decent handling and reasonable refinement. 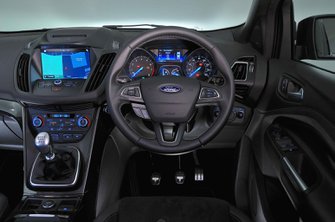