With the 190E and the original C-Class, Mercedes had succeeded in making successful small executive cars, but with this second-generation Mercedes C-Class, it really started to challenge the BMW 3 Series head-on.

Designed to be more rewarding to drive than its predecessor without losing that classic Mercedes comfort, the second C-Class succeeded on both counts. It still wasn’t as fun as the BMW, but it was blessed with responsive steering and decent body control, and it soaked up bumps well, too.

There were also some impressive engines at the upper end of the range, including those in the AMG-tuned performance models: originally the six-cylinder C32, followed by the V8-powered C55.

The interior was generally more spacious and comfortable than that of its rival the 3 Series, and the boot was also bigger and more usefully shaped. Unfortunately though, Mercedes managed to blot its copybook with build quality problems. 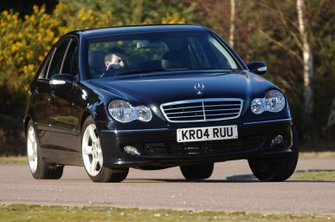