20%+ savings on Kia Rio and Picanto

* 2000 off selected models * In exchange for your old banger * Make sure your car isn't worth more... 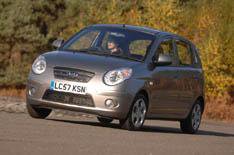 Kia has extended its seven-year switch trade-in incentive on the Picanto and Rio and upped the value to 2000 with selected models.

The 500 increase in the deal's trade-in value means savings of more than 20% on some of the company's superminis, with prices starting at 5370 for a Picanto and 6540 for a Rio.

The seven-year switch deal gives buyers 2000 for any car that's at least seven years old and has fewer than 100,000 miles on the clock, providing they've owned it for at least six months and it holds a valid MoT.

It's perfectly possible that your seven-year-old car is worth more than 2000, of course, so use our free valuation tool to make sure you're not selling yourself short.

Also, be aware that both the new Picanto and new Rio are due this year. The Picanto is expected to arrive in the summer and the Rio in the autumn.