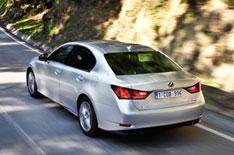 This fourth-generation Lexus GS marks a significant change in the companys thinking. While most of the cars in its current range prioritise comfort and refinement over handling, Lexus reckons the new GS is the first of a new breed that will entertain drivers as well as cosset them.

Unusually for an executive saloon, the GS isnt available with any diesel engines. Instead, theres a 2.5-litre petrol V6 (badged GS250) and a GS450h hybrid model, which combines a 3.5-litre V6 with an electric motor.

Whichever you choose, the GS comes equipped with ventilated leather seats, keyless entry, a reversing camera, an automatic gearbox and 10 airbags, while satellite-navigation is standard on all but the base model.

Whats the 2012 Lexus GS like to drive?
There are a number of different suspension set-ups, and each gives the GS a subtly different character.

SE and Luxury-spec cars have conventional springs and dampers, whereas the more expensive Premier and F Sport models feature an adaptive damping system that allows you to switch between two suspension settings.

The two settings are firmer in F Sport cars because these are supposed to be the sportiest models in the range, while the GS450h F Sport also has rear-wheel steering and variable ratio steering that responds quickly at parking speeds, but is slower on the motorway to aid stability.

The GS generally seemed to ride well when fitted with the Premier adaptive set-up, although the German and Austrian roads that we tested it on were significantly smoother than the ones you typically find in the UK.

Wind and road noise are well controlled. Unfortunately, the steering is vague around the straight-ahead and theres a bit too much body movement for these models to live up to the new GSs sporty billing.

The high-tech GS450h F Sport gets closer because it feels more controlled and eager to change direction, although you pay for this with a less settled ride (even when the softer damper setting is selected), and the steering still inspires little confidence.

The 207bhp engine in the 250 also disappoints, feeling rather weedy. Its only when you ask the smooth automatic gearbox to kickdown and send the revs soaring that the car accelerates with any urgency.

By contrast, the 3.5-litre V6 and electric motor in the hybrid produce a combined 338bhp and deliver strong performance. Throttle responses are particularly lively when you put the car in Sport or Sport Plus mode, while its EV setting lets you run solely on electric power when driving in town as long as the battery pack has sufficient charge.

Whats the 2012 Lexus GS like inside?
The cabin is smartly styled and build quality seems excellent. However, some of the switchgear feels a little lightweight.

A huge infotainment screen (the largest in any production car, according to Lexus) lifts the ambience. Unfortunately, this is linked to Lexuss Remote Touch Interface, which works like a computer mouse and is fiddly to use on the move.

Infotainment system is fiddly to use

The driving position is more impressive because theres a huge range of adjustment for the seat and steering wheel and all-round vision is good.

Just dont expect to get as much space as you do in the rival Audi A6 or BMW 5 Series; rear headroom is quite tight for those over six-feet.

The boot is large and well shaped in the GS250, but its a bit short in the hybrid.

Should I buy one?
Even though the GS comes generously equipped, the 250 model is best avoided because its weak engine averages just 31.7mpg and emits 207g/km of CO2; 12.4mpg less and 58g/km more than the similarly priced BMW 520i automatic.

Its easier to make a case for the GS450h, which sits two company car tax bands below a six-cylinder BMW 530d auto and averages a respectable 46.3mpg. However, the BMW is still easier on fuel (it averages 53.3mpg) and better to drive.

Besides, it is four-cylinder diesels, such as the BMW 520d, which account for the majority of sales in this class, and they're far cheaper than the GS450h to buy and run.

For now, the GS will appeal to a limited audience only, then, but that could well change in the second half of next year when Lexus will introduce a more affordable hybrid model with a smaller petrol engine and four-cylinder diesel-rivalling CO2 emissions.