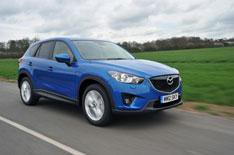 The Mazda CX-5 is one of our favourite SUVs, thanks to its roomy interior and clever Skyactiv fuel-saving technologies.

We even described its 148bhp 2.2-litre diesel engine as 'the best four-cylinder diesel we've ever tested' when we first reviewed the CX-5, and last week this model won the SUV category in our Green Car of the Year Awards.

The on-paper stats for this are pretty impressive: it has a Government average of 47.1mpg, emits 139g/km of CO2 and sits in road tax band E. It's also 1600 cheaper than the diesel model.

This is the first time we've driven the petrol CX-5 in the UK.

What's the 2012 Mazda CX-5 2.0 Skyactiv-G like to drive?
The 2.0-litre Skyactiv engine is powerful enough, but the main issue is that most of its power arrives at high revs, so you have to work the engine and gearbox pretty hard.

The engine can be a bit boomy as a result, but drive the car conservatively and fuel economy is still surprisingly good; the car averaged 41.3mpg in our True MPG tests.

Drive the petrol after the diesel, and you miss the mid-range pull that the diesel has in spades particularly between 30 and 60mph.

Once up to speed, however, the petrol engine is quiet and refined.

Wind and road noise are bigger issues, and the six-speed manual gearbox is a little notchy.

The CX-5 can't match a VW Tiguan for agility, but the steering is accurate, and the car has good grip and reasonable body control.

The ride is quite firm, though, so we'd definitely recommend you stick with the 17-inch wheels that are standard on SE-L cars, rather than upgrade to the optional 19-inchers.

What the 2012 Mazda CX-5 2.0 Skyactiv-G like inside?
The CX-5 is one of the largest cars in its class, and it gives rear passengers more legroom than a Ford Kuga or a VW Tiguan.

The Mazda also has a bigger boot than either of these rivals.

Better still, when you want an even bigger loadbay, you dont have to walk around to side of the car to fold the rear seats, because the release levers are conveniently located in the boot.

The controls on the dashboard are just as well positioned and most infotainment functions are controlled through a simple, BMW iDrive-style controller. However, you have to use a combination of the controller and a touch-screen to complete some operations.

Should I buy one?
Even the entry-level SE-L model is well equipped, getting automatic lights and wipers, climate control, Bluetooth, cruise control and a low-speed accident=avoidance system called Smart City Brake Support,.

Whats more, there aren't many SUVs of this size that can balance power and performance with fuel economy as well as the CX-5.

For company buyers, the lower-powered diesel version still makes most sense, but if youre a low-mileage driver looking for an SUV, this petrol model should be at or near the top of your shortlist.