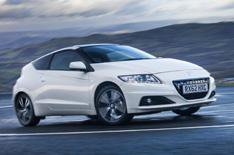 The Honda CR-Z has been given a mild face-lift for 2013, with prices for the sporty hybrid starting at 20,550.

Power for the CR-Z's 1.5-litre petrol engine has been boosted by 7bhp to 119bhp. The electric motor also gets more power, thanks to the addition of a new lithium ion battery that helps to increase combined power output to 135bhp.

Despite the additional power, the CR-Z's fuel economy and CO2 emissions remain the same as the outgoing model's. Average economy is 56.5mpg and 116g/km for Sport versions, while the GT manages 54.3mpg and 122g/km of CO2.

The revised CR-Z also gets a new Sport Plus (S+) boost system activated by a steering-wheel-mounted button that can provide extra electric power to boost acceleration for up to 10 seconds.

Honda has also updated the CR-Z's styling, with a new front bumper, revised front grille and new alloys. GT models will now come with 17-inch alloys. Two new exterior colours will also be available in the form of Aurora Violet and Energetic Yellow.

Inside, Honda has made subtle changes to the colour scheme and improvements to cabin storage, thanks to new door trim.