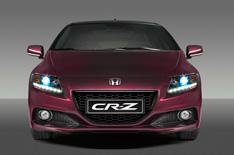 This is the revised Honda CR-Z, which will be unveiled at the 2012 Paris motor show later this month.

Honda has released one picture of the face-lifted model, which shows that it gets a new front bumper and different air intages and grilles.

We'd expect that new alloy wheels will be available, too, and there may also be tweaks to the rear light lenses.

Honda says the CR-Z's hybrid powertrain has been updated, with more power for both its 122bhp 1.5-litre petrol engine and its electric motor.

No technical details have been released, but performance has been improved, 'without compromising fuel economy or increasing emissions', Honda claims. In entry-level S trim the CR-Z averages 56.5mpg and emits 117g/km of CO2.

More details and an on-sale date will be released at the Paris motor show.