More for you |
I want to reject my faulty Lexus ISFacelifted Lexus IS revealed at Paris motor showDeal of the day: Lexus IS HybridOur cars: Honda Civic Tourer, Ford Fiesta and Lexus ISOur cars: Skoda Octavia and Lexus IS
Home
News
2013 Lexus IS to make Detroit debut
news

2013 Lexus IS to make Detroit debut

* All-new Lexus IS saloon * BMW 3 Series rival * On sale next summer; will be revealed in January... 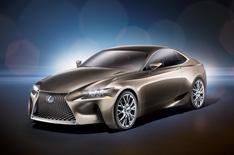 The 2013 Lexus IS will make its public debut at the Detroit motor show on January 15, Lexus has confirmed.

The new Lexus IS will be a rival for compact executive saloons such as the Audi A4 and BMW 3 Series; Lexus has said it will be strongly influenced by the Lexus LF-CC concept car that made its debut at the 2012 Paris motor show.

Lexus has so far released one picture of the new IS; despite its camouflaged covering, it's clear to see it has a similar outline to the current model, and strong hints of the latest GS executive saloon.

Paul Van der Burgh, director of Lexus Europe, told What Car? at the 2012 Paris motor show that the LF-CC gives a very good idea of what to expect from the new IS. He also confirmed that the range will expand. As well as a new four-door saloon, there'll be a two-door coupe, which will look very similar to the LF-CC.

Van der Burgh also told us the current 2.2-litre diesel engine will be dropped from the IS range when the new version goes on sale late next year.

Lexus LF-CC concept car gives a good idea of how the next Lexus IS will look; coupe version will also join the range

Instead, the new IS will be available with an entry-level small capacity petrol engine, while the big-selling model will use a fresh hybrid powertrain that combines a new direct-injection, four-cylinder, 2.5-litre petrol engine with an electric motor.

Official picture shows heavily disguised IS; outline is similar to the current car's

The hybrid IS model will be a direct rival for 2.0-litre diesel versions of cars such as the Audi A4, BMW 3 Series and Mercedes C-Class, with similar power and performance. Lexus says that CO2 emissions should be below 100g/km. Our Green Car of the Year the BMW 320d Efficient Dynamics emits 109g/km.

Lexus LF-CC has a new hybrid powertrain that combines a 2.5-litre petrol engine with an electric motor

The new hybrid powertrain will make its debut in the GS executive saloon in the first half of 2013.

Prices for the new IS are yet to be confirmed, but we'd expect a starting point of around 26,000.

Read the full Lexus IS review >>