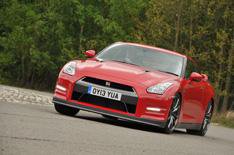 The Nissan GT-R is one of the car industry's best tales of evolution. Over generations it has become a performance icon, capable of humbling 200,000 supercars for a fraction of the budget and Nissan hasn't stopped uncovering further potential.

The 2013 version of the car is the latest example of this. The core ingredients remain a twin-turbocharged V6 engine, four-wheel drive, a six-speed dual-clutch gearbox (mounted at the car's rear) and, bizarrely, a surprisingly practical boot.
The power output from the GT-R's 3.8-litre motor is unchanged at 542bhp and 465lb ft but Nissan claims that a number of minor tweaks have improved its throttle response, particularly at higher revs.

The GT-R also gets revised dampers and springs, a modified front anti-roll bar and beefed-up parts in the transmission (presumably for that ultra-hot lap of the Nurburgring).

What's the 2013 Nissan GT-R like to drive?
Performance has made the GT-R name legendary over generations and the 2013 edition isn't about to let the side down even if the gains left to be made are now extremely modest. The result of the mild tweaks to the engine is, wait for it, a 0.1 second improvement in the car's 0-62mph time; it now takes a frankly astonishing 2.7 seconds.

That headline figure is impressive enough, but the manner in which the GT-R shows its potential in real-world situations is actually more astonishing. Show it a straight piece of smooth road and it has crushing performance from 3000rpm onwards; a decent squeeze of the throttle in second gear is easily enough to reach licence-losing speeds.

The GT-R doesn't slow down much in the twiddly bits, either. This car is no lightweight there's more than 1700kg in play but it does a surprisingly good job of disguising its bulk, with steering and turn-in that remain fabulously direct.

The front end feels alive and Nissan's trick four-wheel-drive system plays around with the torque to make sure that the rear follows suit. It'll take you time to build confidence, but once you do, you'll find that the GT-R can corner at ludicrous speeds.

This makes for an awesome track combination, but the Nissan isn't exactly perfect for Britain's pock-marked roads. On poorer surfaces even the suspension's 'comfort' setting is pretty stiff, and you'll find yourself hanging on as the GT-R skips over bumps and potholes, particularly under hard acceleration.

The gearbox still feels like a sophisticated piece of technology, and the software that governs it in automatic mode is smart enough for most situations. Switch it to its most aggressive manual setting and you'll wince with every shift, as the gearbox thunks between ratios with painful severity.

Refinement isn't really a strong point, but then you probably weren't expecting it to be. There's a constant percussion section of thumps and bangs from the transmission, and both road- and engine noise are intrusive at speed. It might have the pace for crossing continents, but the GT-R would be a pretty wearing companion on this type of long journey.

What's the 2013 Nissan GT-R like inside?
The contrast between the GT-R's track capabilities and the rest of the package is like taking the world's greatest supercomputer and cramming it into a mid-'90s laptop case. There's little wrong with the cabin quality as such it's well screwed together and the seating position and visibility are fine.

However, the design and choice of materials is beginning to date, and even with this performance, it's hard to forgive so much stock Nissan switchgear in the cabin of a car costing more than 70k. All of the cash has clearly gone into the chassis and engine tricks.

The dashboard is still dominated by the central trip computer, which mixes sat-nav functionality with a baffling variety of car data readouts (created in conjunction with Gran Turismo games firm Polyphony Digital).

The GT-R does offer a pair of rear seats that could be used by small adults for a short space of time, and the boot is large enough for a couple of overnight bags.

Should I buy one?
If you are, or were ever, in the market for a Nissan GT-R, then the mild tweaks to the 2013 edition are only going to tempt you even more. It is a one-trick pony, but awesome at its chosen discipline, and if you absolutely must have Porsche 911 Turbo-rivalling track ability, and are happy to compromise on almost everything else to get it, then the GT-R could look a bargain.

However, much like the hot Imprezas and Mitsubishis that used to ramp things up a notch every 18 months or so, the GT-R is beginning to feel like it is from another time. Other models such as the Porsche Cayman and 911, and even the Jaguar F-type would undoubtedly be slower on track but they also offer much more all-round ability, premium materials and value.

Unless you're desperate to shave a few tenths off the next time you're at the Nurburgring, then, we can think of better places to spend 76k.