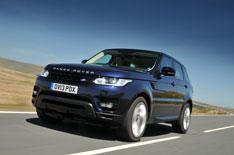 The original Range Rover Sport might have earned itself a reputation for being a footballer's fashion accessory, but it also earned Land Rover an awful lot of money. Even towards the end of its days, it massively outsold rivals such as the BMW X5 and Porsche Cayenne.

This all-new model replaces the old car's butch and boxy looks with a sleeker Evoque-style nose and more elegant rear end, but possibly the biggest difference is how much lighter it is. Land Rover has managed to shed as much as 420kg, which has helped cut fuel consumption and CO2 emissions by as much as 14%.

Whats the 2013 Range Rover Sport like to drive?
If you're hoping the 'Sport' badge hints at the new Range Rover's driving manners, then prepare to be disappointed. It might be lighter than its predecessor, but it still feels heavier and more cumbersome through corners than a Porsche Cayenne. Despite those chunky tyres, there isn't a great deal of grip, either.

However, most buyers won't be the least bit bothered about such things. In fact, a recent poll on Whatcar.com suggests that only around 7% of SUV buyers consider handling a priority; a comfortable ride and top-notch refinement are understandably seen as more important, and it's in those two areas that the Range Rover excels.

Our test cars were fitted with 21-inch alloys (sizes range from 19 to 22 inches) and still did a remarkable job of smothering urban bumps and potholes.

Things are even better on the motorway, where the Sport lopes along relaxingly and feels incredibly stable at speed. Aside from a bit of wind noise from those chunky door mirrors, it's also a hushed cruiser.

The SDV6 diesel doesn't have the outright power of similarly priced rivals such as the Porsche Cayenne S diesel and BMW X5 M50d but is super-smooth and effortlessly flexible from low revs.

The eight-speed automatic gearbox is generally smooth, too, although it'll sometimes get caught out when you need a sudden burst of acceleration.

This is less of an issue in the V8 petrol; its extra torque allows it to pull its taller gears more easily. This supercharged engine also endows the Range Rover with near-supercar pace, because its capable of sending the Sport to 60mph in just five seconds.

Hard acceleration delivers throaty V8 roar, but thankfully the noise dies down to a faded hum at cruising speeds.

Few owners would dream of taking their Sport across a field, let alone throw it at proper off-roading. However, being a Range Rover, it's designed to do precisely that, thanks to the latest Terrain Response system which is fitted as standard and an optional low-ratio 'box.

We took to the lanes of Land Rovers Eastnor Castle off-roading centre, where the Sports hill-descent control and 850mm wading depth made light work of small rivers and extremely steep declines even on its standard road tyres.

What's the 2013 Range Rover Sport like inside?
Cabin quality has long been one of Range Rover's strongest suits and the new Sport delivers convincingly. Every surface and switch feels classy, while new electronic instrument dials borrowed from the regular Range Rover lend a modern twist to an otherwise stately driver environment.

The one disappointment is the touch-screen infotainment system. It looks smart but is frustrating to use, partly because it takes a while to respond to commands, but mainly because the menus are confusingly laid out.

The driving position is pretty much perfect, though; not only are the seats incredibly comfortable, but the pedals line up nicely with the steering wheel and despite the sleeker new styling, all-round visibility remains excellent.

The Sport has no more rear leg or headroom than rivals such as the Porsche Cayenne, but its wider cabin means five people can travel more comfortably. Better still, for an extra 1500, Range Rover will fit a third row of seats enabling you to carry up to seven people although the limited legroom makes them best-suited for kids.

Entry-level SE trim will be available only with the forthcoming TDV6 engine, but even this model will come with a full leather interior, laminated side windows, xenon headlights, rain-sensing wipers, climate control, rear parking sensors, satellite-navigation and a DAB radio.

Should I buy one?
The new Range Rover Sport is hardly a bargain. The SDV6 model, which is predicted to be the biggest seller, starts at 60,000, and the V8 from a huge 81,550. Even the entry-level TDV6 will cost more than 51k when it arrives next year.

However, while some similarly priced rivals are faster and more fun to drive, none is as comfortable or refined. The Sport is also more practical than most premium SUVs thanks to its wide and spacious cabin and the option of those extra two seats. It's also extremely well equipped.

In fact, if anything, the Sport makes the full-size Range Rover seem superfluous, since it's considerably cheaper and almost as big and comfortable.

By Will Nightingale and Rory White