We try the new Mercedes C-Class in the UK for the first time. Can it trouble the best executive saloons, including the BMW 3 Series?... 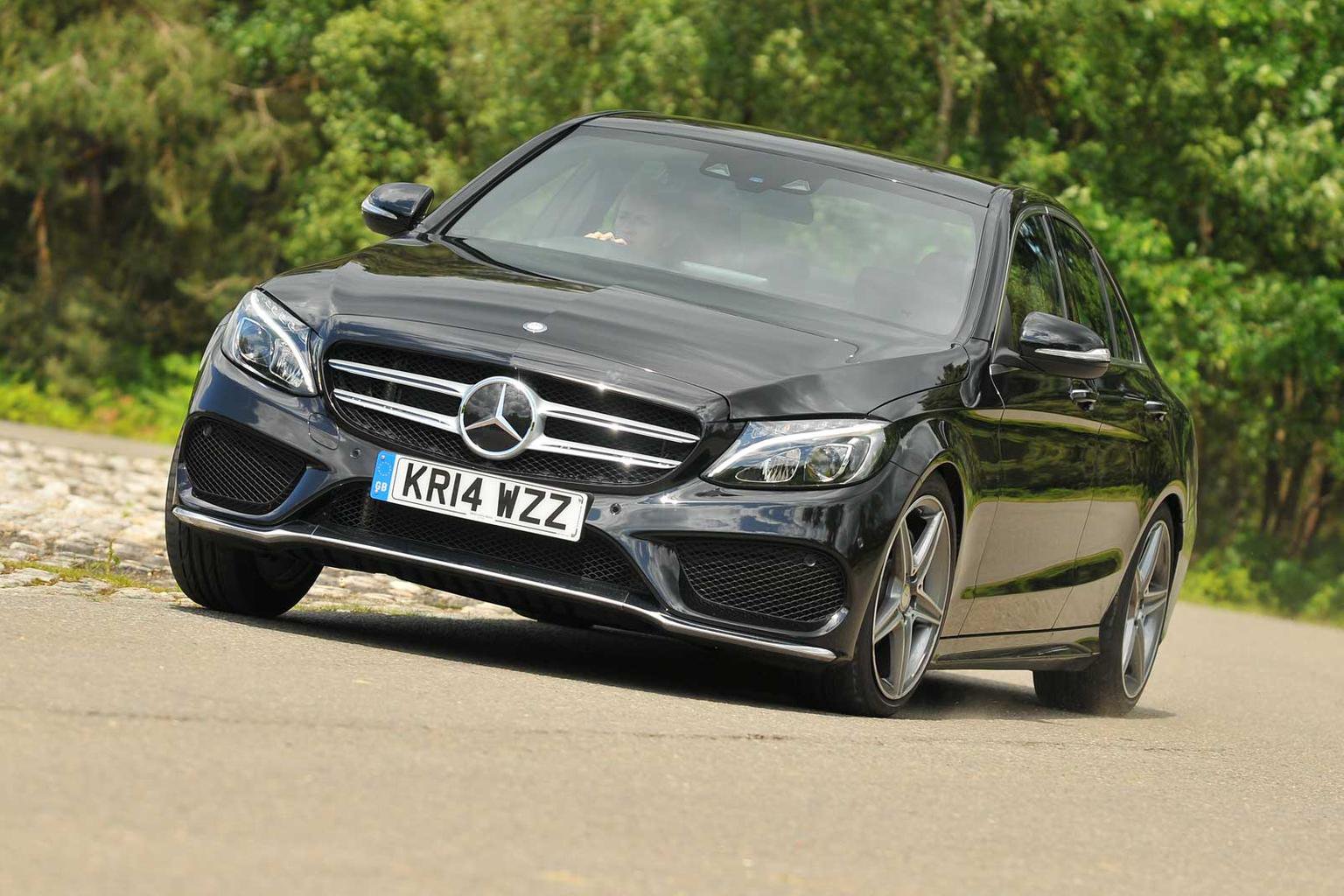 The new Mercedes C-Class has a seriously tough job on its hands. Not only does it have to beat the brilliant BMW 3 Series, it also has to fend off competition from the slightly smaller but considerably cheaper Audi A3 Saloon, as well as larger rivals, including the new Audi A6 Ultra.

To help it do that, Merc’s latest executive car has an impressive arsenal of technology. All models get a new touchpad controller, along with a collision-prevention system that can automatically apply the brakes to prevent you running into the car in front. The 2014 C-Class also becomes the first compact executive car available with air suspension which, in theory, should provide a cosseting ride.

Rather less sensible options will include a 4.0-litre turbo V8 AMG, while all engines in the new C-Class range will be available with Mercedes’ 4Matic four-wheel drive system from 2015.

The C220 Bluetec is expected to be the biggest seller and it’s easy to see why; it pulls strongly from low revs and the swift acceleration continues beyond 4000rpm. Meanwhile, the C250 Bluetec has quite a bit more mid-range oomph, but isn’t really worth the £1000 premium.

The optional seven-speed auto gearbox (which 83% of buyers are expected to go for) works well with both engines. It resists changing down when you just want to build speed gradually, and can even sync with the sat-nav to preselect the optimum gear for upcoming hills and corners. It’s a bit jerky around town, though.

Going for the auto gearbox increases CO2 emissions slightly, but they’re still on a par with automatic versions of rivals like the BMW 320d Efficient Dynamics and Volvo S60 D4.

The C200 Bluetec is even more efficient. The 134bhp 1.6-litre Renault-sourced diesel engine fitted to this model keeps CO2 emissions down to just 99g/km, and the standard six-speed manual 'box is light and easy to use. Performance is decidedly mediocre, though – you have to work the engine hard to get anywhere in a hurry.

The outgoing C-Class was one of the least refined cars in its class. Its diesel engines were noisy and coarse, and motorway journeys were accompanied by far too much wind noise. The good news is the new model is quieter than its predecessor. The bad news is that all the diesel engines still sound decidedly gruff, and there's far too much wind and road noise at a steady 70mph.

However, the optional Airmatic suspension – an £895 option on Sport and AMG Line versions – does a properly good job of keeping things comfortable on the motorway, where the C-Class lopes along in a manner that would shame some luxury limos. We'd definitely recommend it as an option.

Things are less impressive over sharp-edged bumps and potholes in urban environments, though, which all too often send violent jolts through the cabin. We've tried the C220 and C250 on standard suspension in the UK, and although it deals reasonably well with long crests and cambers, it rarely settles in town. On anything but a very smooth surface, the ride is bouncy, jostling those inside.

The AMG Line version we tried - which is lowered by 15mm and rides on 18-inch wheels as standard - was particularly uncomfortable on the typical country roads we drove, and created more road noise too. This drop in ride quality is not accompanied by a noticeable increase in body control either.

On models with the Airmatic suspension fitted, switching to ‘Sport’ tightens up the suspension, to the point where you can hustle the Merc along a country road surprisingly quickly. The C-Class never feels quite as sharp or as fun as a BMW 3 Series or an Audi A3 Saloon, mind, and its steering, while precise, doesn’t always react how you expect it to in fast corners.

Interior quality was never a strength of the old C-Class, but it’s one of this new model's biggest assets. Every surface looks and feels a grade above what you’ll find in a BMW 3 Series, while most of the buttons and switches feel solid and well damped.

Range-topping AMG Line models are classier still, because these have their dashboards wrapped in imitation leather and figure-hugging sports seats.

All models come with a seven-inch colour screen that’s controlled using a rotary dial and touchpad positioned between the front seats. You can scroll through the on-screen menus using just the touchpad, swiping left and right to cycle through functions, and pinching to zoom in on maps.

Most of the time, though, you’re better off sticking with the rotary dial, which is quicker and easier to use on the move. It’s just a pity that whichever method you use, the on-screen menus aren’t as intuitive as the ones in BMW’s iDrive system.

Even seriously long-legged drivers will have no problem getting comfortable thanks to an enormous amount of front legroom, and there’s plenty of front headroom, too – even in cars equipped with the optional panoramic roof.

The glass roof does impinge on rear headroom, although six footers will still fit and things aren’t that much worse than in the back of a BMW 3 Series. You just have to be careful not to bash your head when getting in – the swooping roofline makes this easy to do.

Officially, boot space is on a par with a BMW 3 Series (at 480 litres), and the load bay is easily wide enough for a set of golf clubs. Split-folding rear seats are standard on all but the cheapest versions, and lie flush with the boot floor when dropped.

Sport trim (which adds £1995 to the price) gets you a 17-inch alloys, flashier interior trim, heated front seats, LED headlights, lower suspension, front and rear parking sensors, sports seats and split-folding rear seats. The sat-nav system on this version is not very well intergrated into the rest of the infotainment system, and nor is it as intuitive as similar systems in Mercedes' rivals from Audi and BMW.

The new C-Class has a lot going for it. It’s well-equipped, reasonably practical and has a much classier interior than its closest rival, the BMW 3 Series. It also sets new safety standards in the exectutive class.

It’s even comparatively cheap to lease, and while company car tax bills are slightly higher than those of an equivalent automatic 3 Series, they are at least competitive.

Sadly, the Mercedes isn't as good to drive as many rivals – including the 3 Series and A3 Saloon – thanks to its so-so handling and crashy low-speed ride. It's also let down by its noisy diesel engines and a considerable amount of road noise.

All things considered, then, the new C-Class just falls short of troubling the class leaders.