The ST-Line promises improved dynamics over the standard Ford Edge. But is that what a big, comfortable SUV should be aiming to do?... 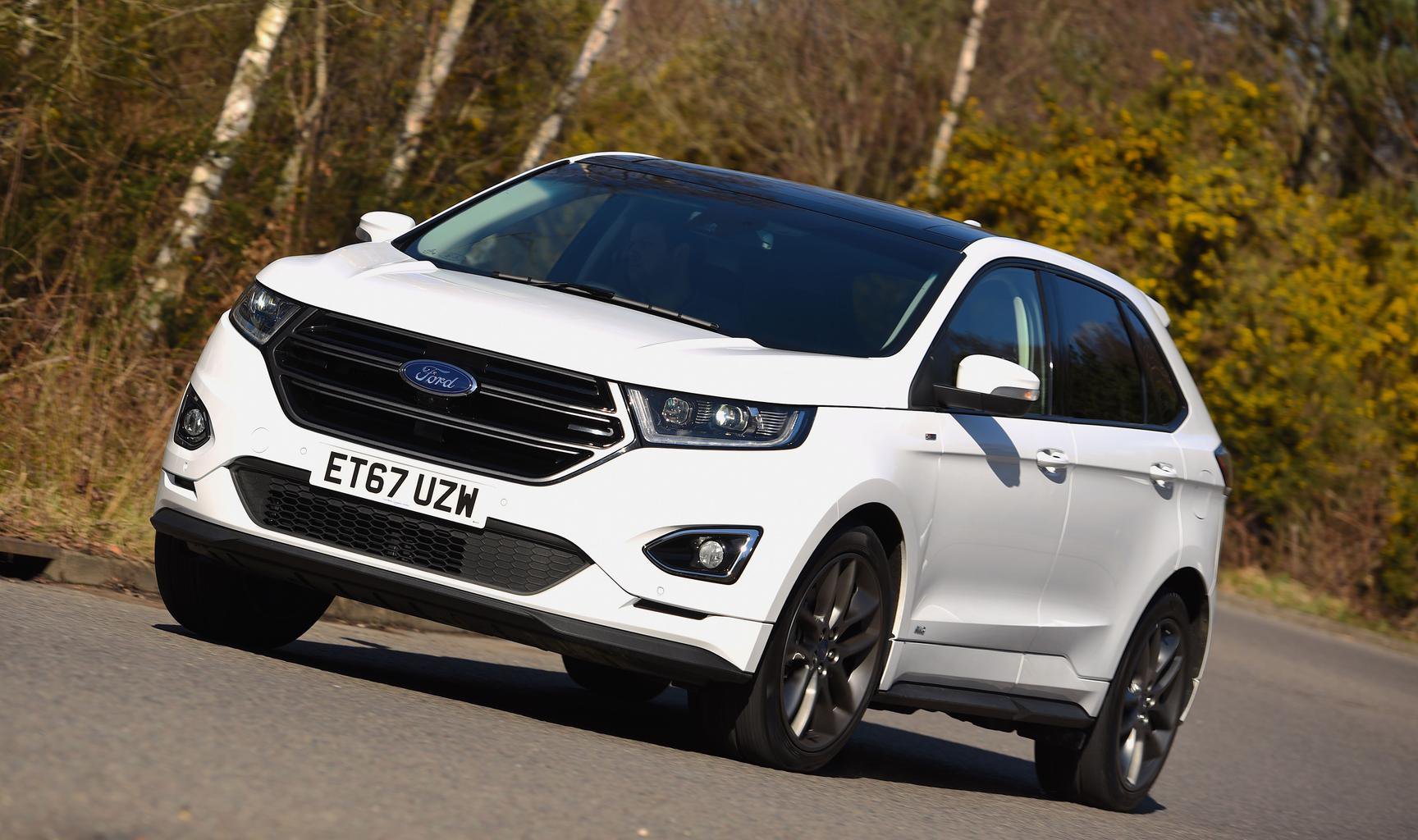 When Ford decided to replace its longstanding - and, let’s face it, lukewarm – Zetec S trim with the Ford Performance-inspired ST-Line back in late 2016, it didn’t come as much of a surprise. After all, the success of the Fiesta ST elevated the ST brand to such lofty heights that it would have been borderline negligent for Ford to not capitalise on it with a cheaper sub-brand.

What we weren't expecting, however, was an ST-Line version of the Ford Edge large SUV, which is arguably the most blunt, imprecise and American-feeling car in Ford’s current line-up. But then again, SUVs seem to be the only thing the car-buying public care about these days. And with sporty variants selling in the highest numbers, not offering an ST-Line Edge would perhaps be the more questionable move.

At least we’re left in no doubt when it comes to the styling. The ST-Line is the sharpest-looking variant of the Edge, with a more aggressive bodykit, dark exterior detailing, black roof rails and larger platinum grey 20in wheels helping to accentuate the car's chunky proportions and characterful lines.

The interior also gets a mild makeover, with a 10-way adjustable Dinamica-lined driver’s seat, aluminium pedals and a Sony DAB radio and navigation system adding to an already comprehensive list of standard kit. 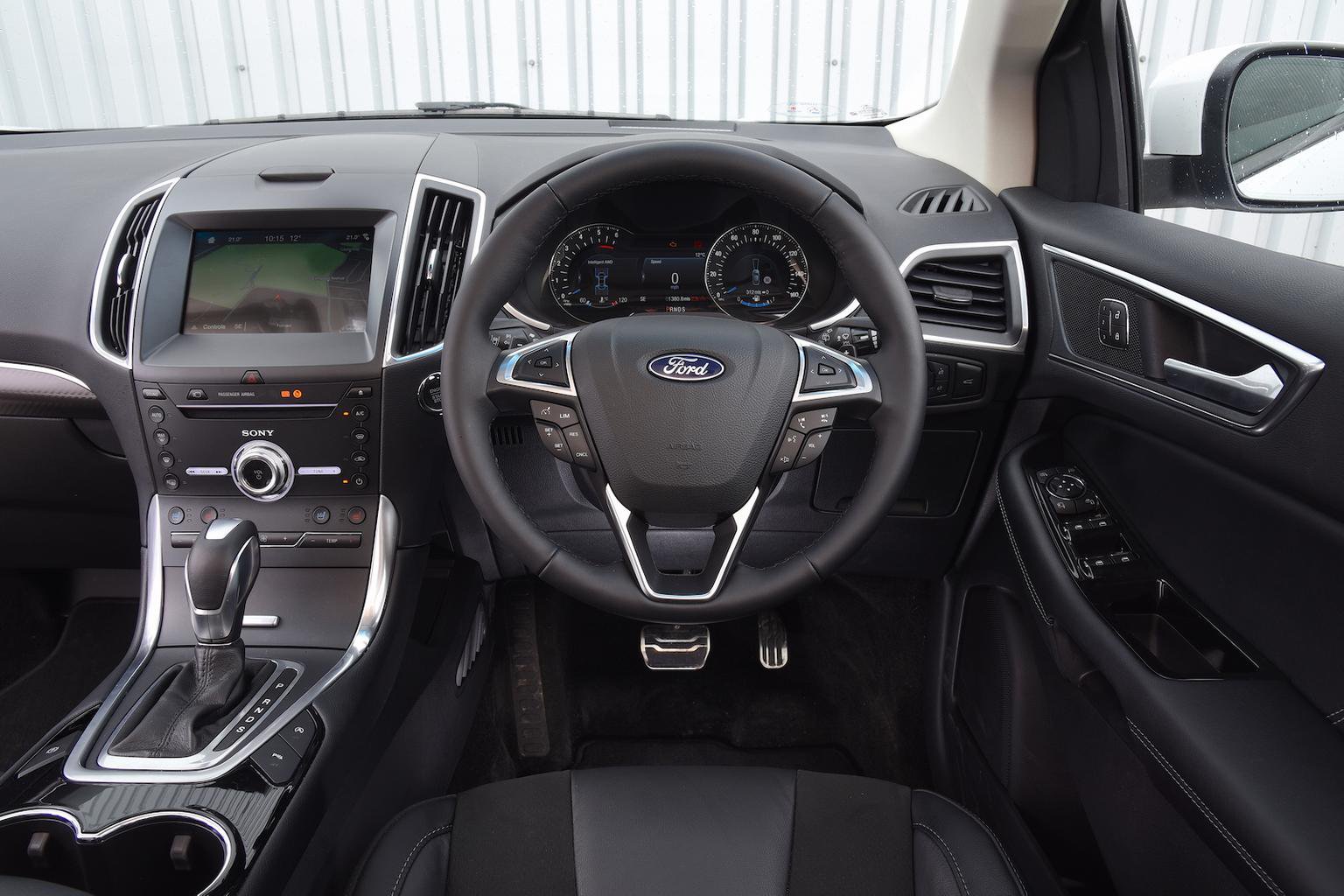 The Edge may have been developed under Ford’s ‘One Car’ Global strategy, but the basic version is by no means a sporty SUV. On standard suspension and 19in wheels, the Edge rides beautifully and takes the sting out of the most gargantuan of imperfections, but the downside is that even a modicum of steering input has the near two-tonne machine pitching and rolling around on its soft springs; ideal on Route 66 but not so much on the Buttertubs Pass.  The ST-Line model, however, feels far more suited to British requirements. With the addition of firmer suspension and adaptive steering, it immediately gives you more confidence, even at normal road speeds. Granted, it still leans and feels distinctly heavy when you're pushing on, but the handling response and body control is no longer compromised by soft springs. Once you’ve turned into a corner, it takes up your intended line quickly and fails to budge, soaking up mid-corner bumps with little fuss.

Of course, the obvious compromise is that the ST-Line doesn’t ride quite as well as the standard car, but it’s still better than the competition, which is remarkable when you consider it comes equipped with gargantuan 20in wheels. Where an Audi Q5 S line on standard suspension shimmies and thumps over potholes and expansion joints, the Edge simply translates those impacts into registrable but untroubling patters.

The Edge’s powertrain isn't quite as successful, however. For example, the 207bhp 2.0-litre diesel fitted to our test car (a less powerful 177bhp version is also available) is smooth and civilised low in its rev range, giving Audi’s and BMW’s four-cylinder oil-burners a good run for their money, but once you stretch it beyond 3000rpm (and you will, if you want to get a move on), it quickly becomes coarse and rather unpleasant to listen to. This, combined with a dim-witted six-speed automatic gearbox, encourages you to drive at a restrained pace, which makes you question why you’d buy an ST-Line in the first place. 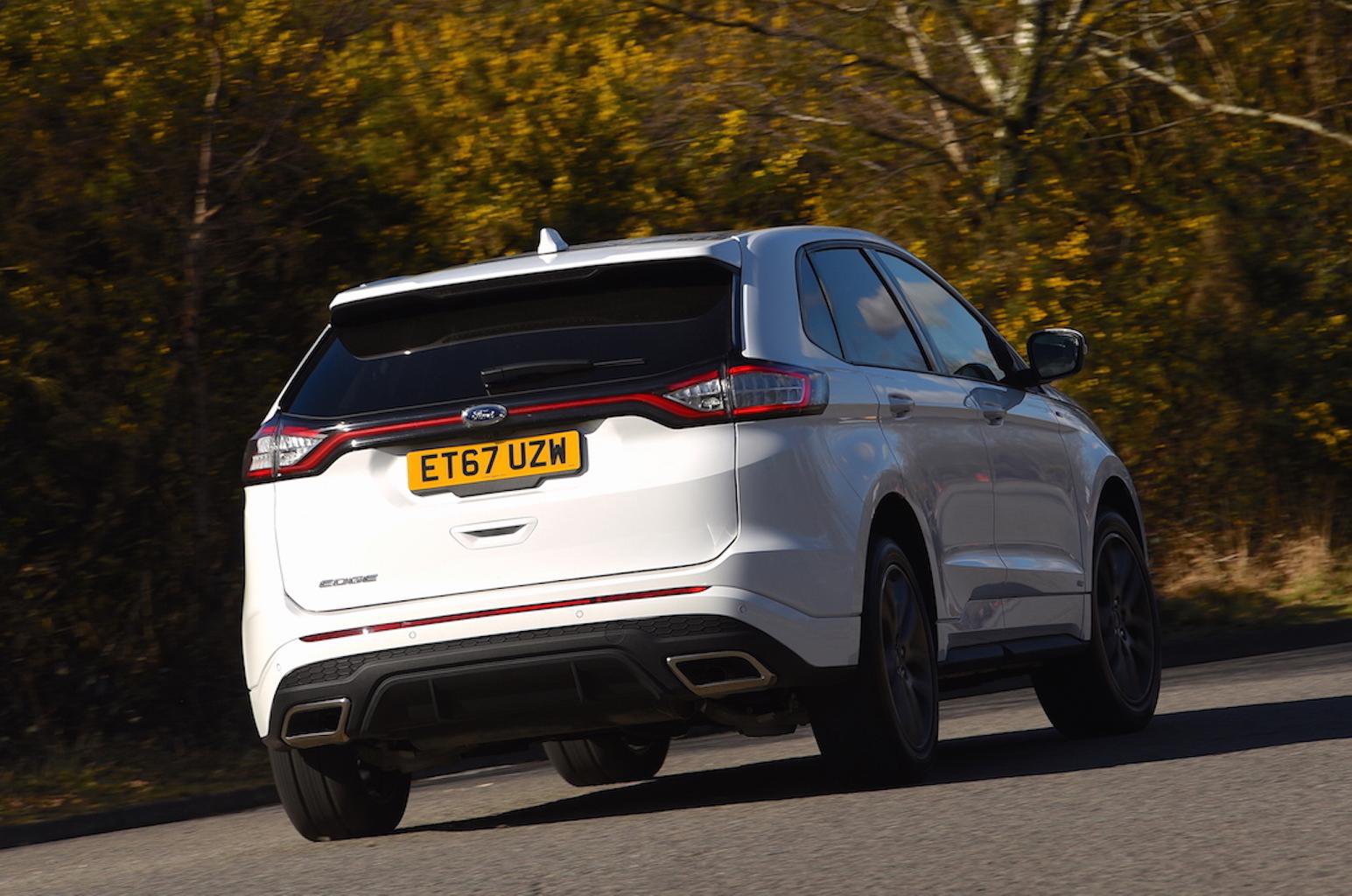 ST-Line models only get a few changes over the entry-level Titanium trim, but that’s more indicative of how well the standard car is equipped than Ford’s reluctance to add extra kit. A 10-way adjustable Dinamica-lined driver’s seat, an 8-way adjustable passenger’s seat and a new Sony DAB radio and navigation system are the main additions. For a full breakdown of the Edge’s features, visit our full four-point review here.

As you’d expect, the Edge has the kind of lofty seating position that SUV buyers love. It gives you a great view of the road ahead, while standard front and rear parking sensors and a rear-view camera give make it easy to park, too.

The Edge does have its weak points, though. For example, the infotainment system feels a few years behind the BMW X3’s iDrive or the Audi Q5's MMI. The Edge struggles when it comes to material quality, too. Yes, it’s screwed together well enough and the upper dashboard surfaces have a soft-touch finish, but lower down the surfaces become harsh and scratchy. Also, the switchgear doesn’t feel as precise as the class-leaders' or even some more mainstream rivals', such as the Kia Sorento.

And, of course, there's the Edge's lack of seven seats. Both the Volkswagen Tiguan Allspace and Peugeot 5008 are among the rivals that do offer a third row and therefore better practicality for similar money.