While the range as a whole gets a light tweak for 2019, the Mini Clubman John Cooper Works gets a whole heap more power too...

The Mini Clubman John Cooper Works (JCW) is a curious beast. Just as a concept, a small car emulating an estate is strange enough, while fitting a couple of ‘barn doors' to its rump so that it mimics a panel van pushes it past wacky.

That’s as true now as it was back in the 1960s, when the original iteration of the Clubman appeared, but back then it didn’t offer a 302bhp turbocharged four-cylinder petrol engine. All in all, then, it’s an oddball.

But you know what? Odd and wacky is arguably why people love the Mini brand, which injects a sense of fun into the world of driving. And while that makes the Clubman JCW hard to pigeonhole, we'd say that while it's technically a performance estate, there will be a lot of people who see it as an alternative to a hot hatch.

Speaking of injections, the current Clubman has reached middle age, and as with us mere mortals, that means a bit of work to maintain those youthful looks. Every version has received a little Botox in the front grille, to make it fuller, and a buttock lift in the shape of LED tail-lights designed in the image of the Union Flag. Now they match their three-door and five-door hatchback siblings once more.

It’s the JCW version of the Clubman that has had the biggest tweak, though. The sharp-eyed among you may have already twigged that the aforementioned power output is a phenomenal 74bhp up on before, but is that enough to make a performance car great? 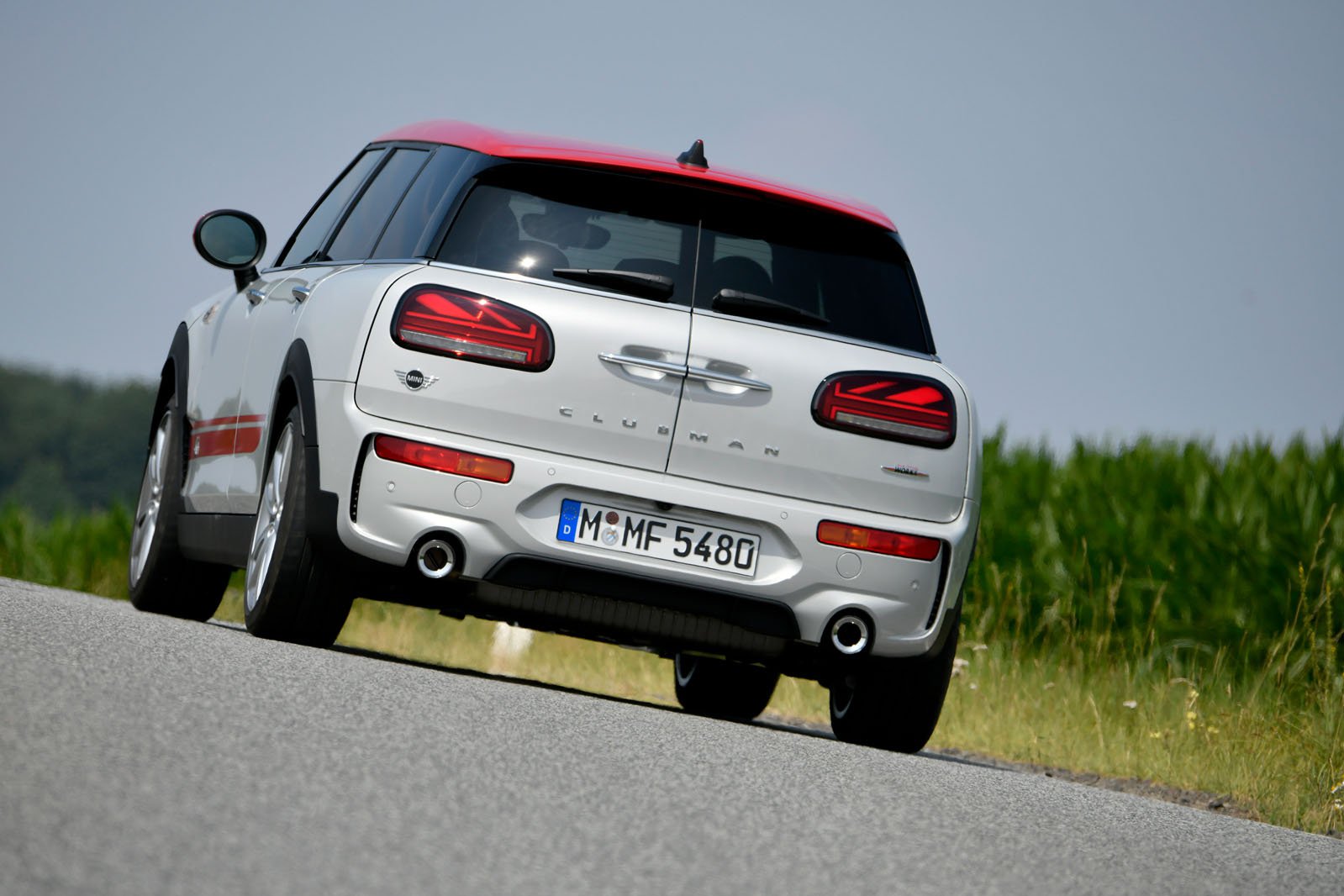 According to Mini, the 0-62mph sprint takes 4.9sec. That's about as quick as the Volkswagen Golf R Estate, although it hides the feeling of speed more. With its standard limited-slip differential and four-wheel drive digging into the Tarmac like a cat’s claws, the Clubman JCW launches cleanly. But this speed is effective yet measured. Partly that’s down to the power delivery: it’s muscular from low revs but ever so linear, meaning there's none of the Honda Civic Type R’s explosive, high-revving urgency to perk you up like a double-shot espresso.

The standard eight-speed automatic gearbox doesn’t help matters. It labours in the everyday Mid driving mode, refusing to change down — presumably to save fuel — unless you delve deep into the farther reaches of the accelerator pedal’s travel. It's much more attentive in Sport mode, though, and manual shifts using the steering wheel-mounted paddles are decently quick.

Does it sound good? Well, Mini has tweaked the sports exhaust, and it now certainly makes an interesting noise: quite high-pitched and, surprisingly, more reminiscent of the Audi RS3’s five-cylinder engine than a regular four-pot. The engine quietens down at motorway speeds, leaving a bit of wind noise and a fair amount of road rumble from the standard 18in wheels. A 19in upgrade (£500) is available.

The ride over harsher bumps is firm but passable for a performance car on the standard, lowered sports suspension. You can specify adaptive dampers (£700) – and we’ll let you know if they offer anymore forgiveness once we’ve tried them — but the standard setup’s tautness already delivers excellent body control.

On inviting B-roads, you can push hard, trusting that the Clubman JCW will stay settled through fast turns and unwavering over any mid-corner peaks or troughs. It's not as grippy as the Civic Type R nor as agile as the Renault Mégane RS, though, and its steering is still a weakness.

Yes, the Clubman is less darty and nervous on the entry to corners than the shorter Mini hatchbacks, but there’s never enough weight build-up in the steering. You don't feel connected to the front wheels as a result, so placing the nose isn’t as easy as in, say, the Civic Type R. The brakes are powerful but less progressive than those of the hot Honda as well, feeling a little grabby at urban speeds. 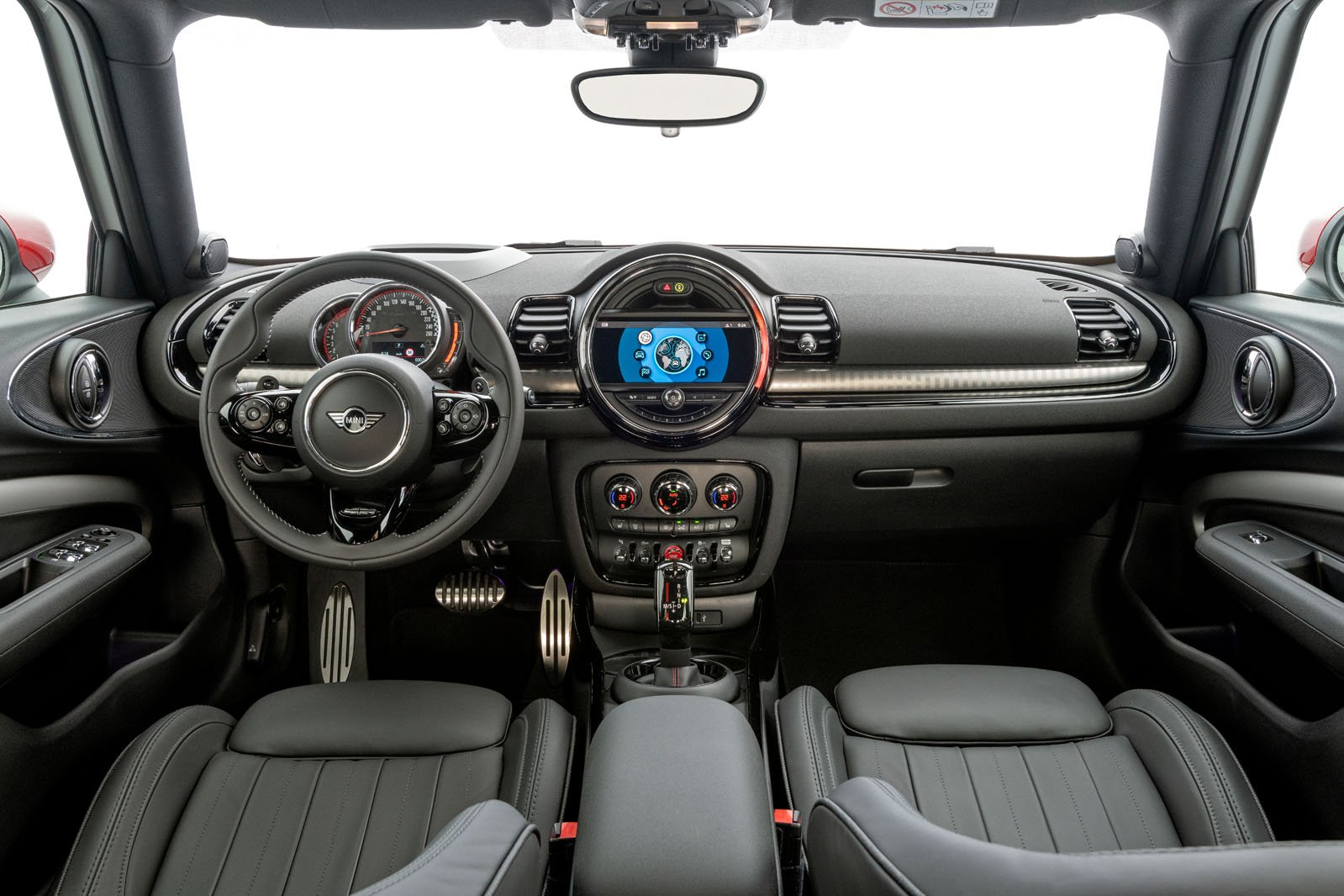 You won’t notice a huge difference inside the updated Clubman. It’s still way funkier than the Golf R inside and backs up the style with some choice materials that would make the average Civic Type R or Mégane RS owner green with envy.

The standard infotainment system is easy to use but outdone on feature count by that of the new Mercedes-AMG A35. If you upgrade to the bells-and-whistles Navigation Pack Plus (£1300), you get more toys, a bigger (8.8in) screen, online connectivity and, new for 2019, the ability to connect to Amazon's Alexa. That means you can ask it questions, like “When’s the next service due?” in the comfort of your own home.

Another Mini strength is the driving position. You sit low, with your legs stretched out and the ability to have the steering wheel up close, just like in a sports car. And despite the interior's obvious focus on style, it’s dead easy to operate all the buttons, while visibility isn't bad, even with the frame of the back doors obscuring part of your rearward view.

Front space is mega if you're tall. Space in the back is okay, but there’s more rear leg room in the Civic Type R. Those unique boot doors can’t be opened fully when parked close to something behind, and there's less luggage space than some rivals — again, the Civic Type R being one. It’s flexible, though, with some underfloor storage and latches to prop the rear seatbacks up vertically, so you can still seat passengers and squeeze in a few more items. You have to pay £200 extra for 40/20/40-split folding rear seats.

If you want a bit more detail on the space available or wonder what the infotainment system is like, our full Mini Clubman review has all you need to know. Or to see how much you could save on a Clubman without any haggling, check out our New Car Buying service. 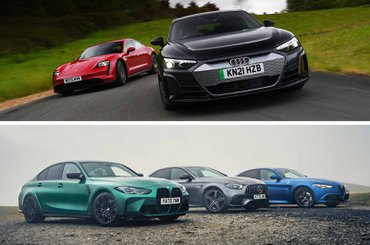