Thanks to a new 48V hybrid engine, Fiat’s trendy 500X small SUV has gained some extra efficiency and lower CO2 emissions. But is it all style over substance? We find out...

The Fiat 500X uses its trendy styling to help it stand out from the crowd of smaller SUVs on sale. In fact, if you like the look of the little Fiat 500 hatchback but need some extra space, the 500X could be just the car you’re looking for. Unlike the majority of Fiat models though, the 500X hasn't been available in any electrified form. Until now, that is...

The 500X’s engine line-up has been extended to include a new 48V mild hybrid engine that’s said to increase fuel efficiency and reduce CO2 emissions by up to 11 per cent. As a result, Fiat says the 500X Hybrid is an even more tempting proposition, thanks to its reduced ownership costs. That mild hybrid tech is in line with what the Ford Puma has installed, while the Toyota Yaris Cross goes even further with its full self-charging hybrid system to cover small distances on electric power. If you want to go completely petrol-free, the pricier Peugeot e-2008 is a fully-electric alternative. 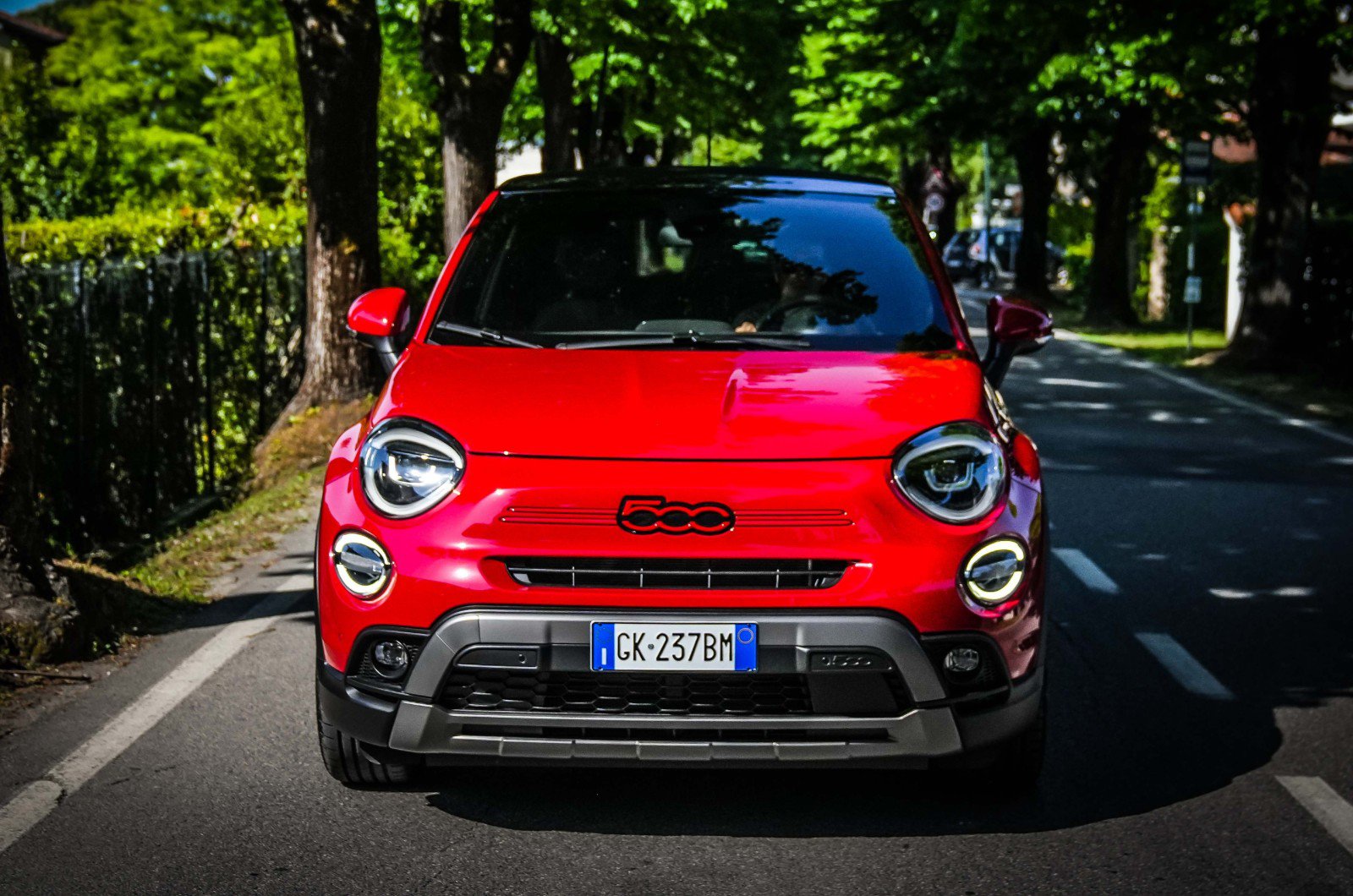 So it's a little cheaper to run and a little safer to drive, but just how good is the latest hybrid to join the Fiat range? Let’s take a closer look.

While much of the 500X Hybrid remains the same as the standard car, the big news here is the new petrol engine, named the 1.5 Firefly T4, which is twinned with a 48V mild-hybrid system. Combined, that gives you 128bhp to play with and will officially propel you from 0-62mph in 9.4sec.

That doesn’t sound like much, but it just about matches the more powerful 1.3 Firefly 150 petrol-powered (non-hybrid) variant to give you enough performance for motorway slip-road sprints. That’s mainly due to the fact that Fiat has used the mild hybrid's electrical assistance to bolster low speed performance and give you near-instant power, making pulling away from junctions easier.

It’s not all good news, though. Once on the move, the seven-speed dual-clutch automatic transmission can be frustratingly slow to drop down through the gears when you ask it for a sudden burst of power. As a result, it doesn’t react quickly enough to take advantage of gaps in traffic. 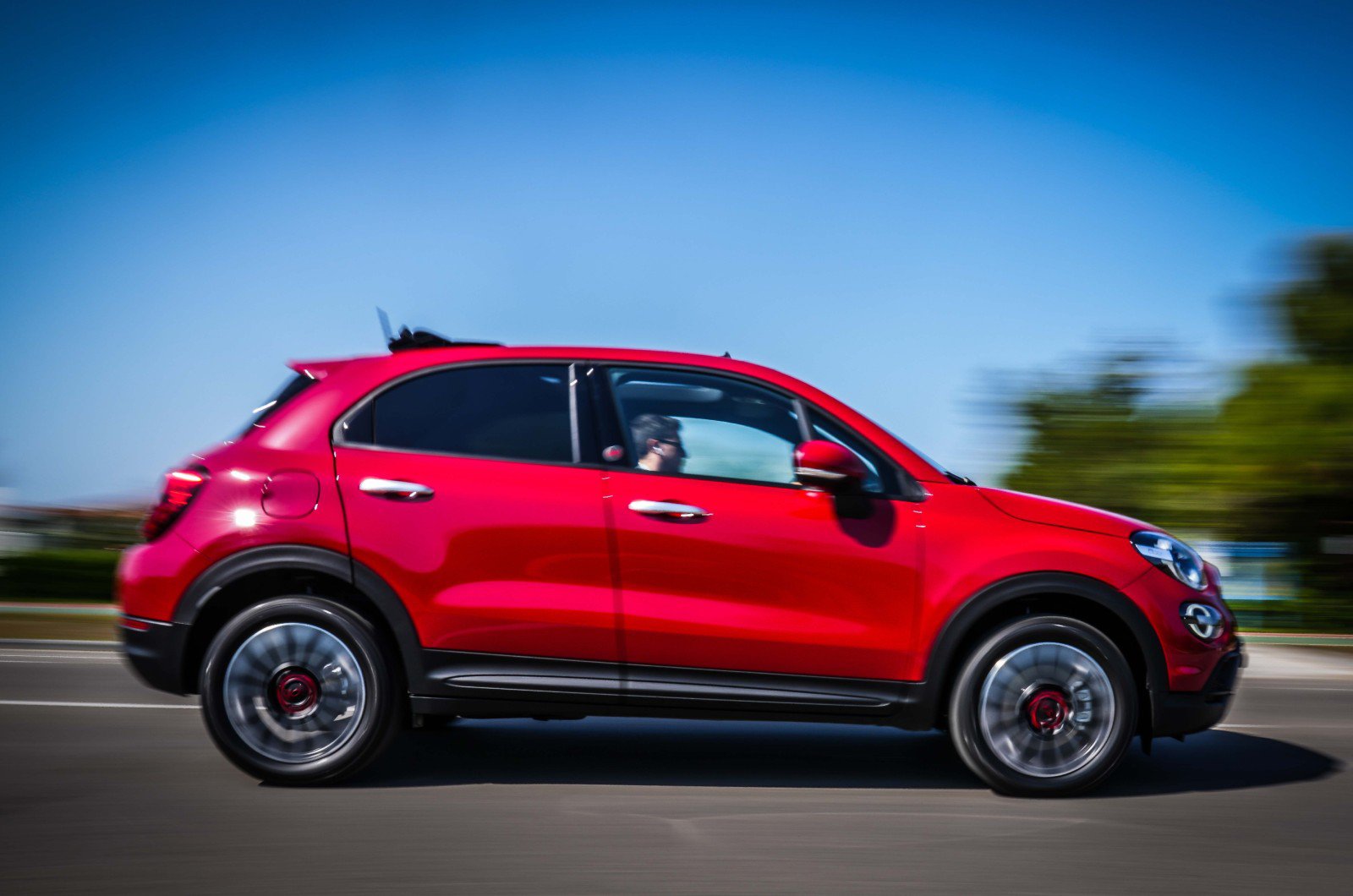 When you don't need full power, the 500X Hybrid can drive solely using the electric motor for small periods of time. Don’t get too excited – it’ll only really work when you’re crawling slowly in traffic, and when you turn on the climate control or do anything more than tickle the throttle, the engine will burst into life. There’s actually a bit of an art to keeping the petrol engine switched off.

Even so, with the 500X Hybrid cutting the engine during coasting and when its stationary in traffic, this SUV should get closer to 50mpg than the entry-level 1.0-litre petrol engine's 44.8mpg figure. It can’t quite match the 52.3mpg you officially get from the entry-level Ford Puma 1.0-litre 125, though.

When it comes to handling, the Puma and the Seat Arona are likely to be more appealing to anyone looking for car that's enjoyable to drive on twisty roads. You see, the 500X Hybrid leans a fair amount during cornering and the light steering doesn’t give you much feedback. In fact, the whole experience feels slightly numb and you’ll never really know what the front wheels are up to. 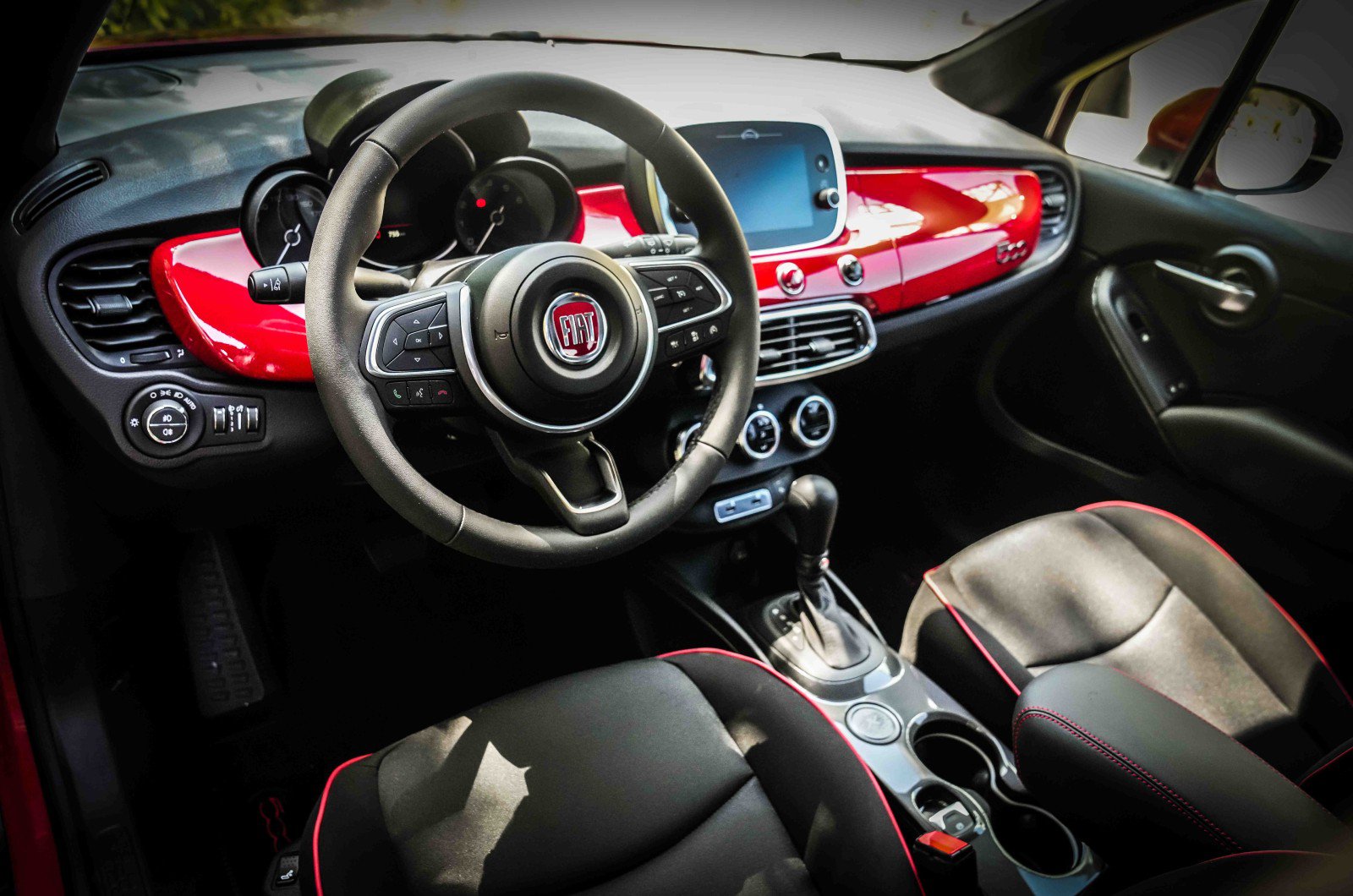 On the other hand, that steering makes the 500X Hybrid really effortless to drive at slow speeds and when it comes to parking manoeuvres.

In terms of ride comfort, rivals including the Skoda Kamiq and Volkswagen T-Roc are much better at isolating occupants against bumps. Don’t get us wrong, the 500X isn’t going to crash through potholes, but the set-up is firm enough to transmit the majority of imperfections as they pass under the car, leaving passengers constantly moving around in their seats.

There haven’t been any notable changes to the 500X's interior alongside the introduction of hybrid power. That’s not a bad thing, because the bright layout and swathes of retro tones have always made it a striking and visually appealing environment.

Likewise, you also get the same elevated driving position for great forward visibility and the same level of driver’s seat adjustment that makes finding your chosen seating position a doddle. The driver’s seat itself remains comfortable, but if you regularly travel long distances, we’d still suggest adding the optional Comfort pack because it adds electronically adjustable lumbar support and a front armrest. 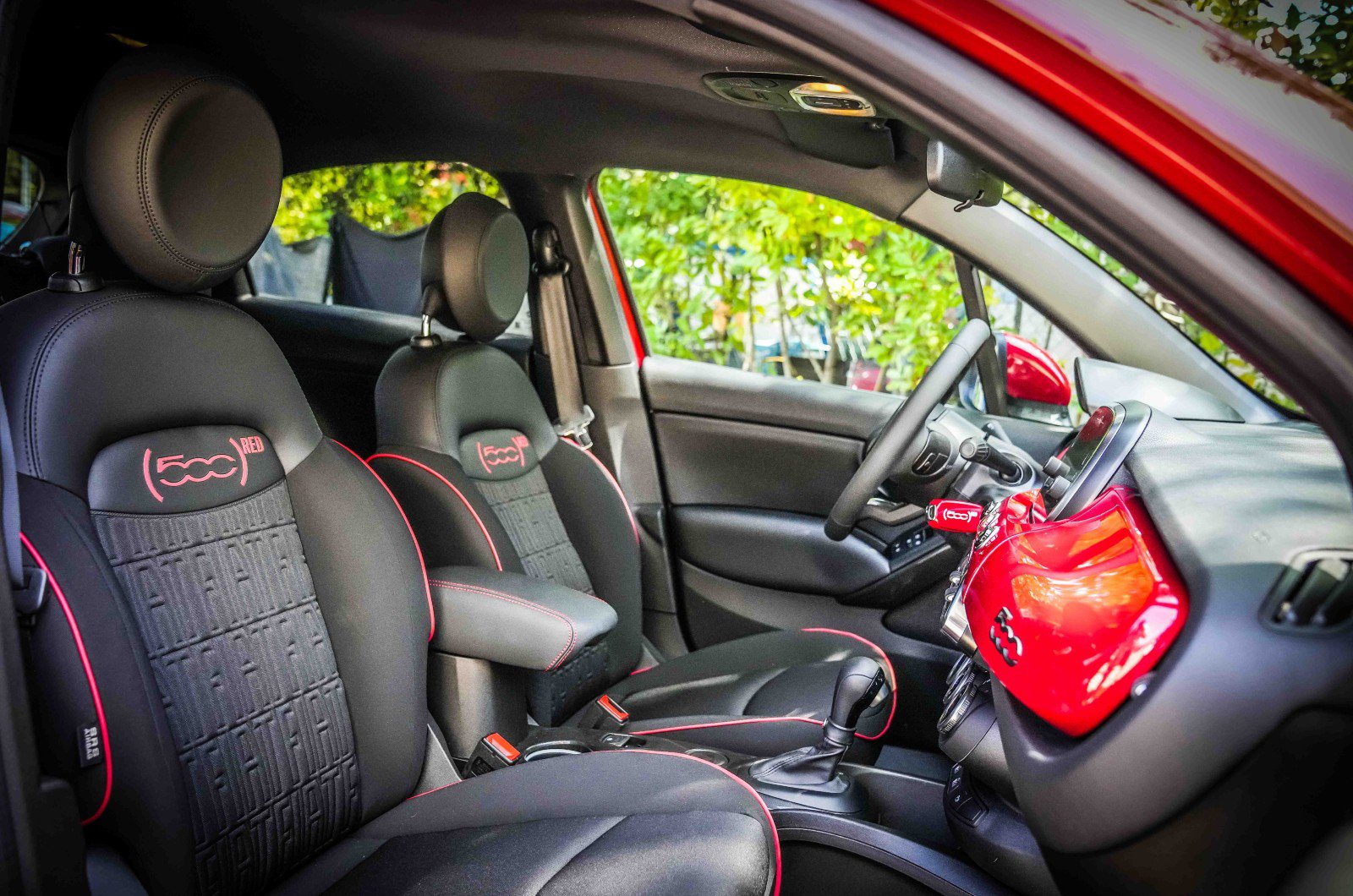 You’ll find that there’s more than enough space in the front to give six-footers generous head and leg room. The news isn’t quite as good in the rear – while there's ample head and leg room for two passengers over six feet tall, the seats are uncomfortably upright. What’s more, the 500X hybrid isn’t quite as wide as many of its small SUV rivals, so three adults will find themselves struggling for shoulder room.

A 7.0in touchscreen infotainment system with DAB radio, Bluetooth, built-in sat nav and Apple CarPlay/ Android Auto smartphone mirroring is standard with all trims. It’s just a shame that it hasn’t been designed particularly well, and reacts slowly to your inputs. On the plus side, it’s laid out in an intuitive way and it’s refreshing that you control the air conditioning with physical knobs and buttons instead of through the touchscreen. 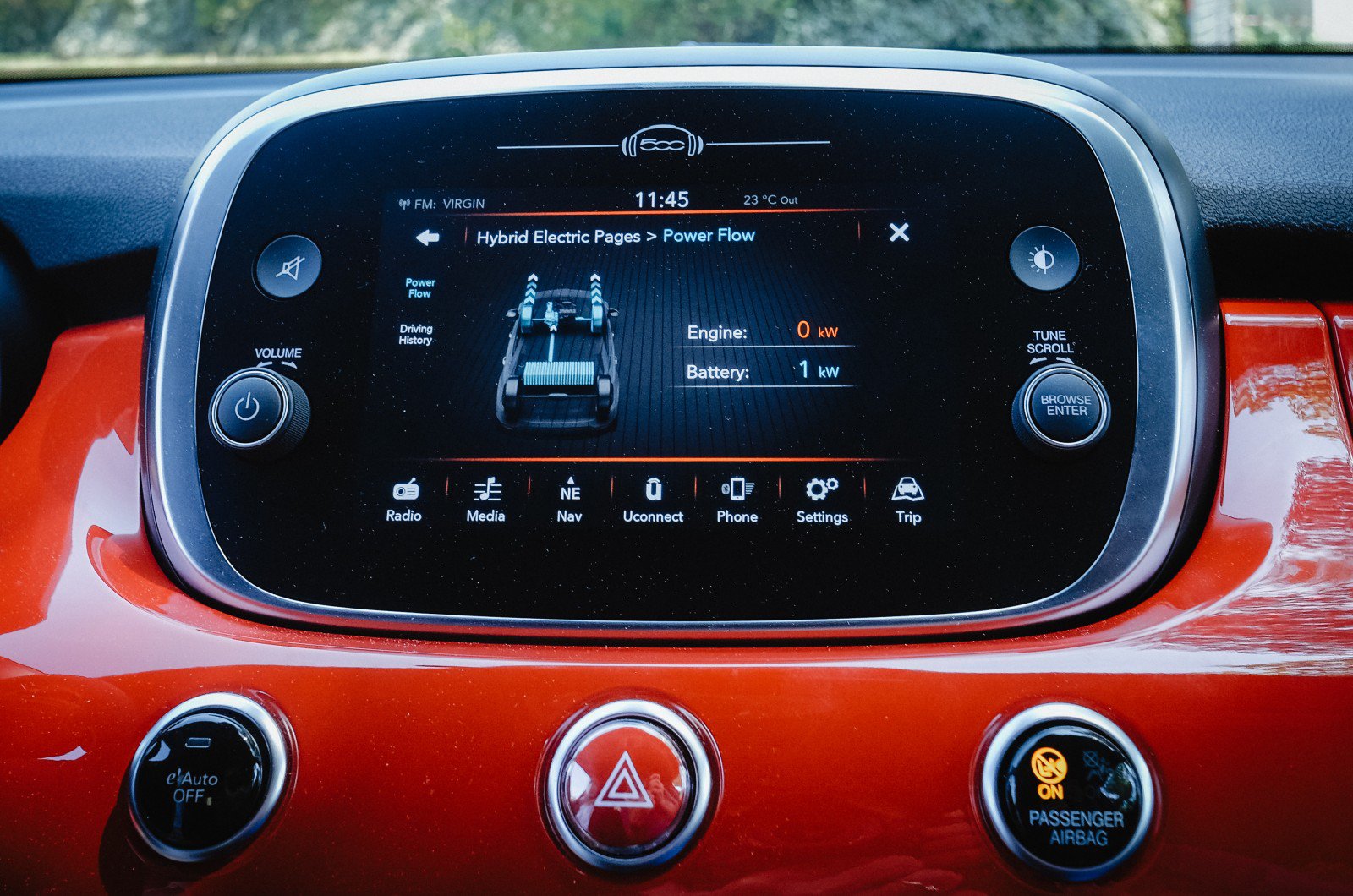 If you want to know more about the 500X Hybrid’s interior and how practical it is, we have detailed and dedicated sections on both of those things in our full Fiat 500X review.