A Kia-n sense of smell 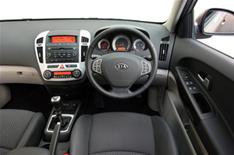 No, this isn't an early April Fools joke - Kia really has revealed that interior components on its cars are smell-tested before they are approved for sale in Europe.

As part of the company's push to ensure that its cars are perceived as being totally European, it seals components in a jar and has them smell-tested before they are fitted.

David Labrosse, from the product planning department of Kia's European Research and Development centre in Germany, said: 'When the Cee'd was being developed, we discovered that our Korean colleagues were attuned to different smells from us.

'The European nose is quite different to the Korean one. We like different smells so we developed odours for the car's interior that were pleasing to Europeans.'

Labrosse says that it is difficult to describe the ideal smell, adding: 'If we don't like the smell, we try to find the cause of the problem by breaking the materials down and cooking them to find out where the wrong odour is coming from.'