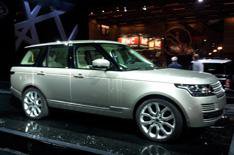 This is the all-new Range Rover, which has made its public debut at the Paris motor show.

The new Range Rover takes some visual elements from other popular models in the Land Rover range including its baby brother, the Evoque but gets a ground-up redesign that makes it lighter, faster and more efficient than any previous model.

The biggest change to the new Range Rover is one of the most radical rethinks in the model's 40-year history. Instead of the old steel construction, the new car gets an all-aluminium body structure thats around 39% lighter.

That helps the new Range Rover to be around 420kg lighter than the car it replaces, a gain that opens up new possibilities with engine choices and much greater fuel economy and lower CO2 emissions.

More luxury inside
Land Rover says it has responded directly to customer feedback on the Range Rovers interior, so its no surprise that the new model will offer more space and easier access for rear-seat passengers. Buyers will also be able to customise that interior to a greater degree than ever before. The front cabin has a tidier, more classy look than before, with extensive use of veneers in the centre console around the ventilation controls and the rising circular gear selector.

The front cabin has a tidier, more classy look, with extensive use of veneers in the centre console

The basic three-tier dashboard design including the large central touch screen and even the positioning of the start/stop button is clearly influenced by the Evoque and the newly refreshed Freelander.

The new model has a longer wheelbase, and most of that has been devoted to the rear cabin; Land Rover says passengers there will have over 120mm more legroom than before. There will also be the option of an Executive Class rear cabin, which has two armchair-style seats instead of space for three passengers. The redesigned seats are said to continue to offer the Range Rovers traditional command visibility, although itll be interesting to see how they deliver this and sufficient headroom, given the sloping rear roofline.

Land Rover is also said to be developing an even longer model, although whether this will offer seven seats or merely an even more spacious rear cabin is still unclear.

The Range Rover will cost from 71,295 when it goes on sale in January.

The 5.0-litre supercharged model is the final engine that will be available at launch, with prices starting from 98,395. The largest of the three engines will blast the Range Rover from 0-60mph in just 5.1 seconds, and is available in Autobiography trim. First deliveries are scheduled for early 2013.

A version of the 275bhp unit already installed in the Jaguar XF, should bring huge gains in efficiency