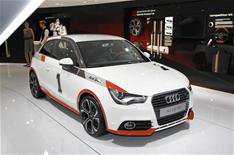 The Paris motor show is the first public outing for the latest version of the A1 hatchback, the 1.4 TFSI.

It's powered by a 1.4-litre petrol engine, that uses both a supercharger and a turbocharger to produce 182bhp. Itll go from 0-62mph in less than seven seconds, and keep going until it reaches 141mph.

However, youre not overly penalised for this performance, because this hot hatch returns an average of 47.9mpg, and emits 139g/km of CO2.

High tech, high spec
Its the first time that Audi has used this type of engine in a road car, and theyre also equipping the A1 with other sexy options to run alongside the high-tech powerplant. A seven-speed S Tronic semi-auto gearbox is standard, and its capable of changing gear in just a few hundredths of a second, while a limited-slip differential is used to maximise traction when cornering at high speed.

The engine will be sold only with high-spec S line trim, which will include air-con, electric windows, Bluetooth, and half-leather sports seats. The package is finished off with a distinctive bodykit and 17-inch alloys.

Although prices havent been announced, we think itll cost around 20,000. Youll be able to order this hot hatchback towards the end of the year.