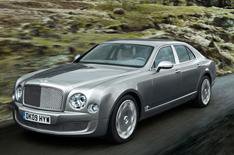 The new Bentley Mulsanne will cost from 220,000 when it goes into production in the spring.

The announcement comes after its debut at the Pebble Beach Concours d'Elegance in August and the Frankfurt motor show in September, plus more than 1000 private customer previews at Bentley's headquarters in Crewe.

Production of the Mulsanne will start in the spring, using a newly built facility at the company's headquarters.

More efficient engine
The Mulsanne's hand-assembled engine will be significantly lighter than its predecessors which, along with other mechanical tweaks, will contribute to a 'significant' cut in fuel consumption and CO2 emissions. Exact figures, however, are yet to be announced.

Specifying the car won't be a quick job, with buyers given the choice of 114 paint colours, 21 carpets, nine wood veneers and 24 varieties of leather hide for the upholstery.

In addition to this, customers who can't find the perfect paint job can define a unique colour that can be mixed to match their 'vision and taste'. Each Mulsanne will take nine weeks to build.

A big noise
Behind the leather and wood, the Mulsanne also has MP3 connectivity, Bluetooth and an option to specify a 20-channel, 2200-watt stereo the world's most powerful system to be fitted in a production vehicle.