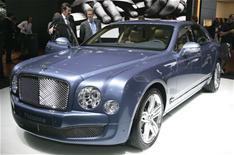 What is it?
The Mulsanne is the replacement for the Arnage luxury saloon.

At its heart is a 6.75-litre V8 configuration that sounds familiar, but its a completely redesigned engine.

The Mulsanne is very much a traditional Bentley - a luxury limousine rather than a sports super-saloon. Its intended as a rival for the Rolls-Royce Phantom.

The Mulsanne is named after a corner on the Le Mans race circuit, and although it looks to the future, Bentley says that it was inspired by its 8-Litre grand tourer of the early 1930s.