Bentley to continue with W12 engine

* W12 engine still being developed * Updated version could have around 600bhp * Plug-in hybrid being considered, too... 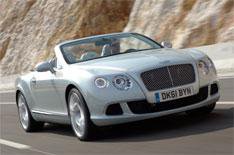 Bentley will continue to develop its 12-cylinder engine, despite current trends for downsizing and the arrival of the companys all-new V8, Bentley's technical director Ralf Frech has revealed to What Car?.

The W12 can have the same improvements as the new V8, he said, admitting that the current 12-cylinder, fitted to the Continental range could see improvements to fuel economy and power, possibly taking it close to 600bhp (the current W12 has 567bhp).

Other insiders suggested that Bentley engineers are developing an eight-speed auto gearbox to replace the current six-speeder.

Frech also admitted that Bentley is considering hybrid technology for its cars.

We are looking at the possibility of a hybrid, particularly a plug-in hybrid, but we are waiting for the next generation of technologies because none of the current solutions work, he said.

Bentley sources have previously admitted that the Mulsanne luxury limo and forthcoming SUV are likely to have a hybrid option.