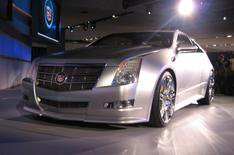 Cadillac pulled off a rare coup by keeping one of its concept cars secret until its official unveiling at the Detroit motor show: the CTS Coupe concept.

Born out of the CTS saloon project, GM's vice president of design, Ed Welburn, describes it as a project that wasn't meant to happen, but was driven forward by a team of designers who didn't want to stop work on the car they had created.

Cadillac maintains the car won't go into production until it has fully gauged reaction, but the revelation that it has been designed with diesel power in mind suggests plans are already well advanced.

It sounds like it could be a good fit for the British and the European market, too.