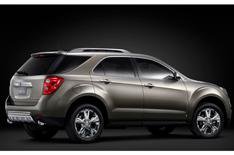 With parent company GM on the receiving end of a life-saving multi-billion dollar Government bailout just before Christmas, it's no surprise that its presence in Detroit is fairly muted.

One car being shown to the world for the first time, though, is the revamped Chevrolet Equinox.

As with it's predecessor, it's not going to go on sale in the UK, but it does provide an interesting gauge of what is considered fuel-efficient in the USA, a country where the thirsty V8powered pick-up is still king.

The Equinox is billed as the most frugal 4x4 in its class, even though the most efficient engine will only hit 36mpg on the motorway.

Still, that fuel economy's to be expected in a big-engined car that's designed to carry the family and the contents of your house around.

The inside is notable for its abundance of storage space, including an oversized glovebox, a closed storage bin in the instrument panel and a gap under the centre armrest that's big enough to carry a laptop.