Does Tony Blair read What Car?

* Former PM blags Jaguar XF * Sources say he may buy one * Lucrative contracts ensure he can afford it... 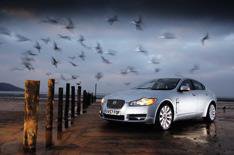 Blair certainly hasn't wasted any time blagging the loan of What Car?'s Car of the Year, the Jaguar XF, a month ahead of its official release.

The car has been spotted parked outside Blair's home in London's Connaught Square, and officials have confirmed it has been given to him to test drive.

Life has been good to Blair and his wife, Cherie, since he stepped down from office last year, so the 50,000 price tag shouldn't put him off.

He is working as an adviser to Wall Street bank JP Morgan Chase, earning 500,000 a year, while his memoirs have earned him a 4.6 million advance.

Meanwhile, Cherie's memoirs have been sold for 1 million, and both she and her husband are earning tens of thousands of pounds a night acting as guest speakers at events.