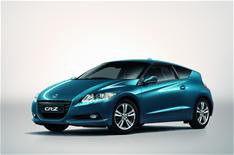 This European-spec Honda CR-Z hybrid will make its debut at the Geneva motor show next month.

The CR-Z aims to shake off the worthy-but-dull image of some hybrids with its sporty looks and 'kart-like' handling, but combined with with relatively low carbon dioxide emissions and high fuel economy.

The CR-Z is powered by a 1.5-litre petrol engine and an electric motor that's linked to a six-speed manual gearbox.

Total power output is 122bhp, while emissions are pegged at 117g/km and average fuel consumption is 56.4mpg.

Haven't we seen the CR-Z before?
The car was originally revealed at the Detroit motor show in January, but this European-spec model has a 2+2 seating layout and LED daytime running lights.

The car shares many components with the Insight hybrid, but the CR-Z is shorter and lighter.

Honda says the CR-Z has what it calls a '3-Mode Drive System', which allows the driver to choose between three settings that alter how the car responds, including throttle and steering responses.

The car will be on sale in the UK by the summer. Prices have yet to be confirmed, but expect to pay around 18,000.

Also on Honda's stand at the Geneva motor show will be the FCX Clarity hydrogen fuel cell car, which is currently available to lease in California and Japan.