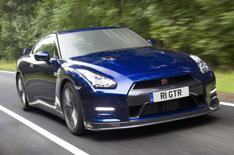 The fastest and most powerful Nissan GT-R is available to order now, with deliveries starting from next February.

The 523bhp model is 50bhp more powerful than when the car was launched in 2008, although torque output is unchanged at 434lb ft.

It's a big jump, but Nissan says this 'still represents outstanding performance at a competitive price'.

Although official figures have yet to be released, an expected 0-62mph time of between 3.2 and 3.3 seconds is a good starting point.

The potential top speed is around 196mph, while emissions and fuel economy should be improved from 295g/km and 22.8mpg.

There's an R launch mode for the ultimate in fast getaways and more rigid body thanks to extra struts.

The suspension has been tweaked for even sharper handling, while new tyres offer improved grip and better straight-line stability on rutted roads.

Downforce is up, drag is down, cooling is enhanced and the seats are also now more comfortable.