More for you |
Chevrolet's Epica bargainWhat Car?'s top 10 used electric cars (and the one to avoid)10 most unreliable SUVsWhat Car?'s best cars for less than £250 per monthGuaranteed discounts on our 2020 Award winners - save up to £19,366
Home
News
First drive: Chevrolet Epica
news 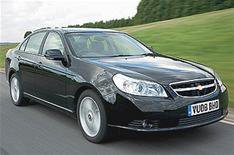 If you want lots of space, but don't have lots of money, Chevrolet has just launched a car that merits your attention.

Epica by name, epic proportions by nature - this is a car that is only marginally smaller than the standard-setting Mondeo, but which is available for Focus-type money. There's loads of room for four adults, and plenty of luggage space, too.

Despite that low-end price, Chevrolet has also managed to pack the car with kit. Take a deep breath, because the base LS model is equipped with all of the following:

So where's the catch? Well, although the 2.0-litre petrol and diesel engines are adequate, and the ride and handling competent, there is nothing about the Epica's drive that shines.

What's more, the diesel, which is expected to account for the bulk of sales, is unrefined and noisy.

It also suffers from a catastrophic rise in carbon dioxide emissions from 169g/km to 210g/km when fitted with the automatic gearbox.

The petrol-engined car puts out 205g/km of CO2, too, meaning company car buyers and anyone with an eye on future VED road tax rises had best be extremely wary.

Fashion-conscious buyers might want to proceed with caution, too. The car's bland exterior styling only hints at the horrors that lie inside.

Although the Epica is well put-together, its fascia looks dated and feels cheap. Big, chunky buttons are everywhere, and the green LED dash display belongs to a computer screen from the 1980s.

At least all the controls are within easy reach and intuitive to use, but even the least modern-minded driver will find it hard to shake off the feeling they are in a car that's been beamed in from a bygone era.

None of this is going to help the car's resale value, which is already compromised by having a Chevrolet badge on the front.

The Epica is undoubtedly worth a look, but buying a used version of a more loveable large family car might be the more sensible solution to solving the space-versus-money conundrum.