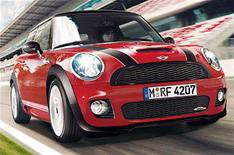 The Mini may have retro charm, but it still has to move with the times.

The 173bhp Cooper S is great fun, but with many hot hatch rivals now providing well over 200bhp, it's starting to look a little weedy.

This new John Cooper Works version narrows the gap - it's much more than just a bodykit, special 17-inch alloys and a shedload of badges.

The acceleration feels just as outrageous as it sounds, and it's accompanied by a burbling exhaust note that makes it even more tempting to get busy with the throttle.

As hot hatches go, it's hotter than a blacksmith's armpit.

The suspension has been tweaked, too, so the extra power doesn't make the Works too much of a handful.

There's more than enough grip to cope, and the Mini's unbelievable poise and quick, precise steering means it's just as great to chuck around as ever.

There's a long list of electronic driver aids to help keep you on the straight-and-narrow if you overdo it, too. Even the ride isn't too raw.

However, while the drive takes your breath away, so does the price. It costs a staggering £20,995 - that's £4750 more than the standard Cooper S.

At least you get air-conditioning as standard for your money and the resale values will be rock-solid.

Even so, that's a lot of money for a Mini - we'd stick with the standard Cooper S.

• The Mini John Cooper Works goes on sale on July 22, but the Clubman version won't be available until next year.